The sudden appearance of the channel beneath us made for a striking image. In a second, the view below changed from drearily shallow to extraordinarily deep and mysterious. And that underwater channel leading out to the open sea was actually only a shadow of what was in store for us as the dive continued.

Without having to signal to do so, the sudden change of venue caused the two of us to stop and hang vertically in the water to communicate. Telepathically, we knew it was time to start the dive. From the surface the terrain looked incredibly interesting below. We couldn’t wait to get down there and check it out. We took our snorkels from our mouths so we could talk about it.

“Hell yeah, let’s get down there. I’ll follow. Lead on buddy.” 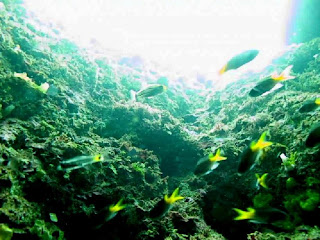 Fish! At last we saw fish, in fact, small schools of them flashed back and forth 20 and 30 feet down; some of them were even good sized. As soon as we went past the confines of the lagoon, THAT is when they began to appear in some numbers; nothing impressive, but it was great to see any fish at all after the travesty of the day before.

We were relieved to see wild swimming creatures, but what really impressed us was the astonishing topography. We discovered that the lagoon actually sits atop a geologic shelf; leave it, and lo and behold the sea bottom drops directly and breathtakingly down to between 40 and 60 feet. With visibility almost perfect it felt as if we had changed universes. 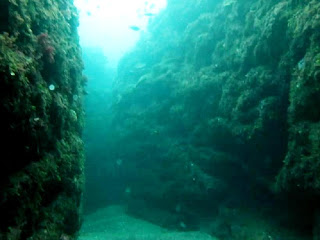 The view was stunning; the sort of spectacle that a diver lives for. In this case we had hit the scuba jack pot and we both knew it. The two of us, hovering 20 feet down—the bottom still far below and sea wall towering high above—spun around to take it all in, then, nodding enthusiastically, we did our first ever underwater fist bump. We were ecstatic at having found this place.

We continued our descent toward the sea bottom but deviated from our original plan slightly in that we headed straight out to sea instead of following the coast to the right. When we could get no deeper I checked my console and noted almost 60 feet. On the way to that depth I could see the same white never ending expanse of white sand that we had seen the day before in “the dead zone” up the coast. 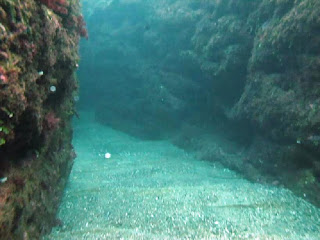 The sand field outside the lagoon looked just as dead and free of sea creatures as the area from the day before. Without venturing too far out into the deeply rippled “sand box” we headed away from that lifeless zone, turning right toward the area that we would eventually call The Canyons.

But that time, where we first happened to go in to that rocky region, all we saw were huge piles of jumbled boulders and rocks, the largest as big as a Volkswagen. We floated over the sprawl of giant stones and until we came up against a steep ramp, too shallow to really classify it as a wall. At that point we veered back to the right since we had butted up against the shoreline. It was easily seen a good 30 or more feet above us where the waves disrupted the surface. I loved the fact that we could see so far in the water. What a treat! 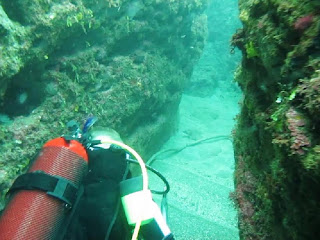 Backtracking for a while, we headed back toward the sand field. It had become a visual directional reference for us. Just the same, I didn’t like the stuff any at all. From what I could tell, if there was no steep wall of rock to keep it back then the sand took that area over, overwhelming and inundating anything it could blanket.

I hated the sight of the deathly stuff. To me it represented evil. Numbly sterile and featureless, even fish appeared to avoid it like it was poison. It’s strange; I’ve never felt that way about any inanimate substance before. 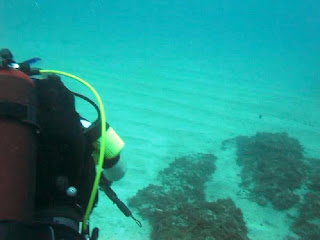 And then, for the first time, we spotted a looming entrance like opening into the side of the gigantic rock formations that we had been swimming next to. Don turned and pointed into the canyon like opening but he needn’t have, since I already had an okay sign formed before he had even turned his head in my direction.

Of COURSE we were going in there! Scuba diving in deep circuitous canyons is like cave diving, only without the danger. Once we found The Canyons, exploring them would keep us busy for our next three dives.

Next: In The Canyons, The Big White Marble. 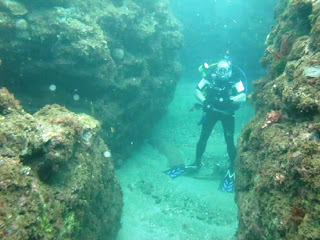 Posted by PhilippinesPhil at 4:33 AM

So are these 'death zones' man made or is it just the natural way things formed? I've always thoughts that when you got far enough away from protected shores all you would see is sand.

man made. i have no doubt.