A trip north, the Bojeador Lighthouse along the way 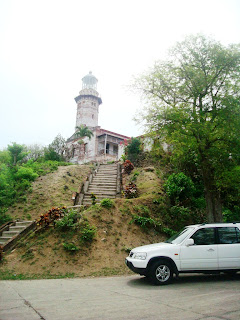 It was a relatively short foray up to the top of the island and back, less than a week in all, but we did a lot, saw plenty and learned even more.

We’ve been back now for four days but with so much to do upon our return—like renewing my driver’s license, putting the kids in school, and getting my dive photos and videos prepped for possible use by a Northern Luzon TV station—I’m only now getting around to writing and posting about the trip here.

The primary goal of this particular expedition was to dive in an area that has probably never been dove before, at least not by scuba divers. As it turns out, surprisingly, lots of people have been down to the deep places we dove, only by a slightly different method than by scuba. More on that later. 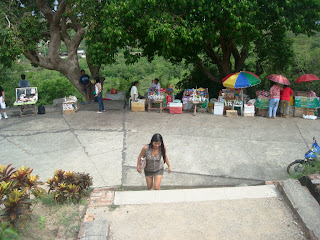 The quiet little town of Claveria was our final destination. To get there we drove almost the entire way up a road that Don simply calls The National Highway, which is called MacArthur Highway where it passes by us just 500 meters from where I now sit.

I'm not sure what that long stretch is actually called, but heading north from where we live on Central Luzon means Don's "National Highway" is THE only way to go north without deviating way to the east or west of here, no nearby expressways or back roads to provide a more or less alternate pathway in that direction. 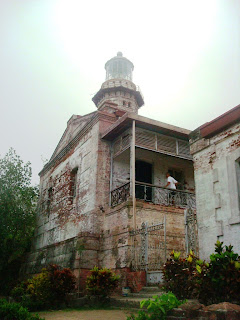 Everyone who lives on or near this primary artery uses it, sometimes even for transportation. They walk on it to visit the next nearest sundry shop called a sari-sari store, and of course, while doing so they socialize along it. Dogs sleep on its tree shaded surface when it’s hot, and in the early morning chill they’ll bask on it in the warmth of the sun. On its shoulders and inner lanes farmers dry their rice and corn crops on it; but mostly, people travel to destinations far and near on it, in trikes, jeeps, cars, jeepneys and buses. 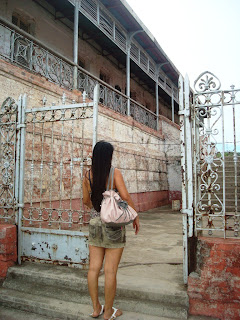 Based on all the above mostly daytime action, we decided to start out at 1:30 am to avoid most of the worst of the “speed bumps” and obstacles in our quest for unhindered travel. From 11 pm until just after sunup the road’s primary users are mid-sized semi-trucks, patiently tooling along at an economical 45 mph, sometimes even slower; which makes that timeframe a perfect time to travel almost unimpeded. 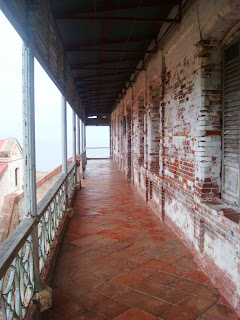 And that’s what we did. With me taking on the roll of “Chatty Cathy” I did my best to keep him alert as we sped north, easily passing every lumbering truck in our way. In the post midnight dark we zipped through Capas Tarlac and a few hours later through the blessedly empty streets of La Union. 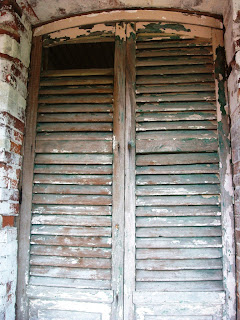 When dawn broke we were almost to the ancient city of Vigan, where the plan was to have some breakfast at the McDonalds smack dab in the center of town. Down its still deserted streets at 6 am we found everyone’s favorite restaurant closed. Vigan’s McD’s doesn’t do early breakfast it seems. Oops.

So, we opted to keep driving. We knew that by the time we reached the city of Laoag a few more hours to the north that both of its Mickey D’s would be open and raring to serve us some egg McMuffins and hash browns. 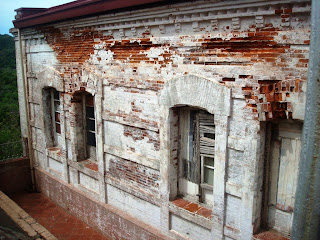 The girls were wide awake when we turned right off the highway to the first McDonald’s in Laoag (pronounced Lawag), the second one being a bit more complicated to get to. It was still early enough that we were just about the only customers wanting to eat.

I hadn’t slept at all the night before but the now streaming sunlight tripped my brain’s wide awake trigger so that I was good to go. Don said that he had lay down for about five hours before getting up at just after midnight, so he was on all cylinders as well. Not bad for a couple of 50 something year olds. 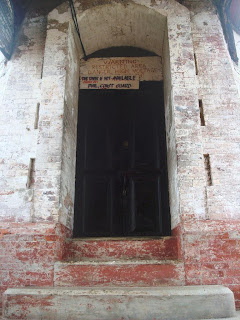 North of Laoag the highway started to follow more closely the coastline, almost always giving us a pleasant view of The South China Sea off to our left. Seeing its rippling waters spreading blue out to the western horizon reminded us of scuba diving, our favorite pastime that we soon hoped to be doing that very same afternoon. 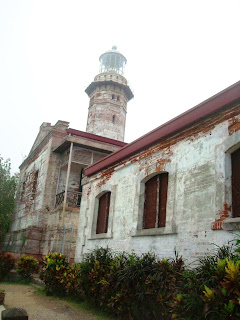 But first, Don said that I would most certainly enjoy a stop at the 120 year old Cape Bojeador Lighthouse, located near the town of Burgos. It was built by the Spanish in the 1890s and marks the most northwesterly spot of Luzon. Don was right. I loved it. And to prove it I took almost sixty photos of it. If you have a few minutes check out the set of them here using Flickr slideshow.

The ancient and the historical fascinate me, something this picturesque structure has both of. This lighthouse, according to this Wikipedia article on it, is a national cultural heritage structure. Unfortunately, despite this lofty designation, it appears to be dissolving into its basic elements fast—the wood is 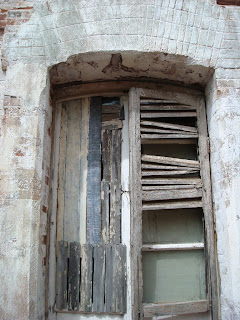 rotting and the mortar disintegrating. Not much seems to have been done to preserve it. In light of that, if you get out that way then make a point to stop in and check it out, for its fading slowly, if not quickly, into ruination. Even so, the photos I’ve taken of the current evidence of its leisurely undoing are quite captivating. 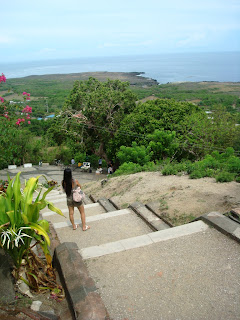 More on the trip tomorrow or soon thereafter…
Posted by PhilippinesPhil at 2:02 AM

Hey Phil, I really have enjoyed your articles. I am curious as to how you met your wife. I hope to maybe one day try to meet a Filipina again. My first marriage did not work out, but I still believe there are many good women over there that would make a really loving and loyal partner. Hopefully I have learned and will be a good husband to a lady from there if God wills. I have just about given up on the ladies over here as far as marriage goes. I really appreciate a simple life and hope to find someone that has learned to be content and not always wanting more. Oh well, just hope you will expound a little if you so choose. Thanks, J.C.

Hi JC, glad you enjoy my meanderings. By now, you know I have an opinion on just about everything and the subject of marriage to the girls over here is no exception. Well, I too have had failed experiences with marriage and both of them were to Filipinas, so I'm not sure if I can tell you that marrying a Filipina is a foolproof way to marriage bliss. Of course, hope springs eternal, and now I find myself married to yet another one. She is great. For me, three was a charm. My recommendation is to realize that when it comes to this place you must be VERY careful. Few things are as they seem at first or even second glance. The truth envelope is pushed all the time. Do NOT do the online thing. Thats a big no no. ALL the girls lie online here, at least to some level they do. My best friend fell in love with a girl that way and it turned out she played him for tens of thousands of dollars before he found out she was married to a local fellow already. Stories like that abound. Only way to do it is to come here, and then come here again, and then again, and when youre sure, go ahead and hire someone to check anyway. Don't give your heart until you KNOW for sure what you are REALLY getting into. And one more thing, check out the girl's family. If the family is problematic your relationship with the girl will also be a problem. Ultimately though, there is no simple formula to finding happiness with one of these wonderful ladies. You just never know where you will find Miss Perfect... Good luck and thanks again for dropping in. pp

By the way, really enjoyed the photos of that structure and the views in the previous post. It really makes me miss being at the Taal Vista Resort in Tagatay.
Well, I really appreciate your wisdom on the marriage thingy. Yes, I think you have a good plan. I was dreaming of going back over there one day and meeting some women face to face and seeing how we were together. In reality, my intention would be to marry a girl there and hope she was happy to stay and allow me to run my business from there. It may never happen because I am not rich, but it is a dream none the less. I do not want to go through the process of bringing a women here and it not working out. My marriage not working out was a mutual break down, but there were certainly some good to take from it.
I am still curious how you met your present wife. She looks very pretty in your photos and I am glad to hear you are happy together. I think having a good marriage and loving someone is more vauluable than all the gold in the world. Sorry, just the old fashioned romantic in me.
By the way, I certainly saw what you spoke of with many of the Filipina women there. I did find an honest girl the first time, but we just never could work past some of our strongly different views on our faith etc. Maybe God will be kind to me next time with a woman that is more similar to me in views on life and faith. Thanks again Phil, J.C.