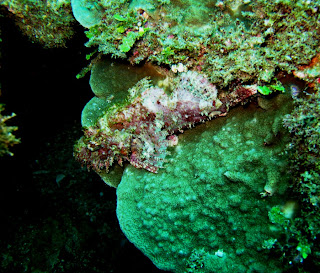 Towards the end of the second dive at the end of our first day in the Claveria Canyons and I literally do a double take when I catch a fleeting glimpse of my first rockfish; in this case a tasseled scorpionfish. I doubletaked because I wasn't sure if it was actually there or not. I had to get almost right on top of it before I could make sure.

These critters are so ugly that they’re beautiful, at least to me they are.

How could you NOT love a fish that nature has gone to such great lengths to camouflage so perfectly? I mean they aren’t rockfish because they LIVE in rocks, although they DO hang out in them; no, it’s because they LOOK like a rock. 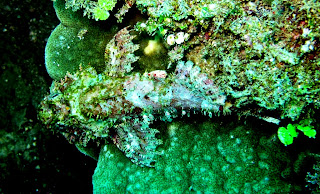 They also have a second claim to fame—they are SUPER toxic. In fact, this family of fish is THE most venomous fish in the world, bar none. Fish of the genus Synanceia (rockfish) do NOT inject venom into their victims by way of fangs—they don’t even have fangs.

They do their self-protective harm through the introduction of neurotoxins into a skin puncture. This normally occurs when an unsuspecting creature, such as an unwary barefoot swimmer, steps on a nearly invisible rockfish’s dorsal fin.

So, for most potentially harmful creatures in the sea, it’s NOT the ones that you see but the ones you DON’T see that get you. 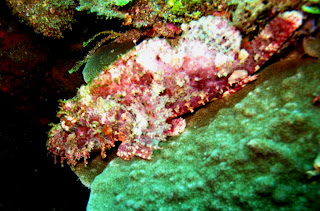 THE number one lesson then that I’ve learned about doing scuba—pay attention. Undersea living booby-traps are everywhere, and it’s why I always wear gloves in tropical waters. And even so, I try NOT to touch anything if I can help it. Of course, it doesn’t matter HOW careful you are; eventually, something IS going to get you, without a doubt. 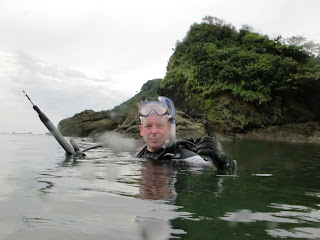 Our excitement from what we had seen that day was so intense that we began to chatter about it right there in the water. We had no doubt that we would head right back to the same vicinity first dive the next day.

I had noticed people splashing and jumping into the water around us as we pulled our way through the rocks of the submerged saddle. A combination of shyness and wariness always keeps me from being open and friendly with strangers, that being the case again, I paid scant attention to the swimmers and whoever it was watching us from up on the large eastern island.

“Hello, what is your name?” asked a young female voice, followed by giggling, which instantly caught our attention. 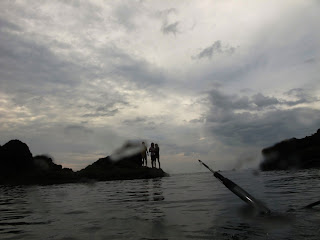 Three young ladies in water-soaked shorts and t-shirts, all still dripping wet from their water play, were perched above us on the smooth cracked sides of what was once a lava flow from some ancient volcanic eruption.

“Hi!” another called out, obviously thrilled to see us. “Is it fun doing that?” she asked.

Don and I forgot about our dive for a while and just enjoyed conversing with these three flirtatious “mermaids.”

I can’t even remember how many times that’s happened to me over here, where girls and women, dazzlingly beautiful, yet completely unpretentious, act interested—in ME for crying out loud. 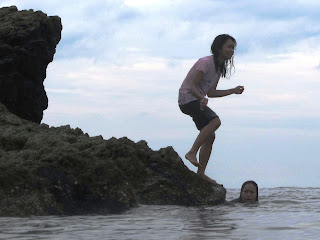 Of course both of us are completely spoken for, seriously committed in fact, but that’s not the point. The cool thing is that we KNEW that if we WANTED to that we COULD get to know these charming young fillies. We could have chatted with them until the two of us became waterlogged and sank to the bottom if we wanted to.

And yes, we are both WAY too old for them; at least we WOULD be if we were back home, where the first thing any young thing thinks when they see any male over the age of 35 is “EWWWWW!” And I’m sure you could add a retching sound to that for guys over 50, like us. (chuckle.) 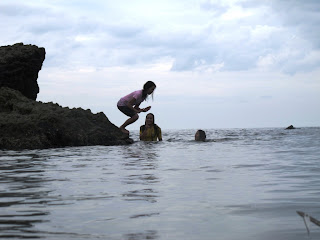 Never mind the social and economic reasons why this kind of thing exists in this place. We hear it all the time, “They only pretend to be interested because they think you can take care of them and their family.”

And I always laugh, “Okay, and your point is…?”

We said our “so longs” to the chatty chipper damsels, leaving them back to their diving and splashing, and made our way back to land.

Weary from the two incredibly exciting dives I dragged my body horizontally through the shallows as far as I could before having to revert to a standing walking land creature once again.

Angry dark storms clouds spitting the occasional rain drop fooled me into thinking dusk was close upon us, but it was barely past 4 pm. The early shade was fine by me, it made me feel cool and relaxed. 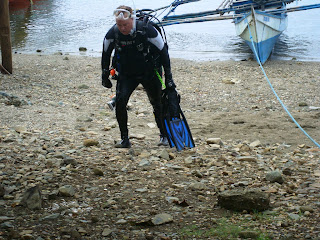 We gushed and exclaimed over the wonderful sights we had just witnessed while shedding our gear piece by piece. Carefully dropping my tank and BCD to the concrete floor I plopped hard onto the wooden seat slats, still breathing hard from the effort of walking up from the water with all that crushing weight. It was okay though; the fresh memories of that wondrous underwater world just right out there made every ache and pain completely worth it.

The girls scurried over us, breaking down our gear and rinsing each separate piece while we mostly rested. My wife had me stand while she unzipped my wetsuit down the back and began spraying me down inside the suit and out with fresh water from the pavilion’s hose. Yes, we let them baby us, take care of us, something they really seem to take great pleasure in. Who am I to stand in her way? 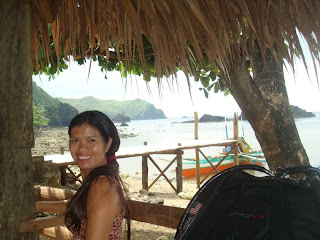 Our post diving routine was already set. On the way back to the hotel we stopped at the local market so the girls could buy cold drinks as well as meat and vegetables to cook for the evening meal. We never accompanied them. The mere sight of a foreign tourist is enough to jack the prices up double.

Back at the hotel I washed the salt off me in the shower while the girls cooked together over a charcoal stove in the hotel's outside communal kitchen. Unfortunately, the hotel doesn't offer meals or even much in the way of drinks, so we were on our own in that respect.

We could have driven down the road a piece to one of the handful of eating places in Claveria, but the girls don't mind cooking that way. And better yet, the food they cooked was just fine by me.

Yup, Don and I are spoiled as heck. We ARE lucky dogs!
Posted by PhilippinesPhil at 2:04 AM