Chasing a krait, then ogling an eel 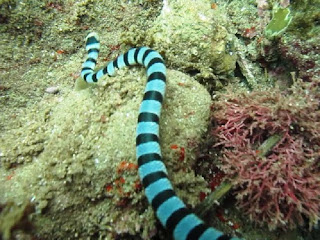 This is probably a Laticauda colubrina or Laticauda laticaudata, all the online photos I found of those two species look similar to the one I videoed (see below) in the canyons outside of the Claveria lagoon.

It seems that every single dive trip I’ve ever been on I see at least one krait, or banded sea snake; and this trip was no different. We made a total of 8 dives this trip and saw this single snake.

I never get tired of seeing them. Just knowing that their venom is ten times more poisonous than that of a King cobra, always makes it thrilling to observe them. 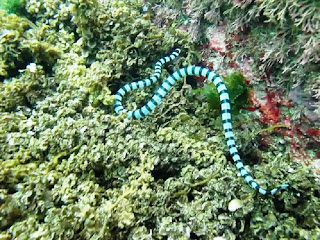 The first time I saw a krait is back when I was still just a snorkeler. When it happened I made an immediate retreat, meaning I swam backwards, always keeping my eyes locked on the thing. All I knew then is that every sea snake is potently venomous and that was enough. I was scared to death.
Of course, I found out later that sea snakes are rarely aggressive toward humans as can be seen in my video. All this poor fellow wants to do is get the heck away from me. 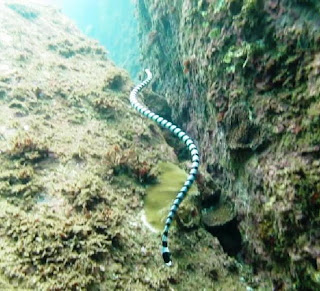 I have seen them act very curious and begin to swim toward me, which always caused me to swim backwards and away. But once learning how difficult it would be to be actually bitten by one I’ve become a lot more blasé when I spot one.

And since I started seeing my role underwater as a photo / video-diver, I am now the pursuer, looking to “shoot” everything I see, with my camera as my “weapon.”Did you notice? 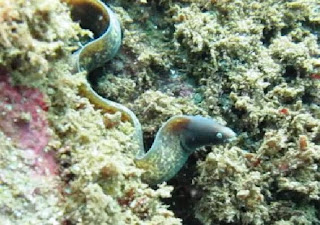 Doing research on kraits reveals that they are mostly nocturnal and THAT explains why I usually only see one or two of them during each trip. Out of my 60 dives I’ve only made one at night.

In my You Tube submission above it makes sense to include the short segment of the juvenile moray eel after the minute plus scene of the Laticauda, since morays are one of the kraits favorite meal items. Although I assume that kraits go for eels small enough for them to swallow, and based on the small size of most of the snakes I’ve seen, they likely only go for baby eels.

Wikipedia states that the Laticauda can get up to 11 feet long. I would LOVE to film one close to that length. I’m sure I'd be scared to death and yet thrilled to the bone, all at the same time. 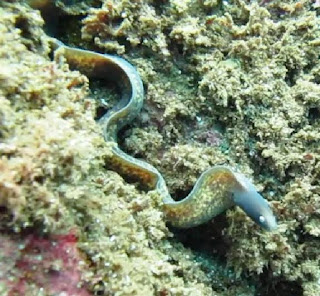 We saw only the single moray in the canyon, which is out of the lagoon channel to the right or east. It wouldn’t be long though before we would find a spot so populated by the things that we ended up naming the spot after them. More on that in an upcoming post.
Posted by PhilippinesPhil at 3:26 AM

To quote Indiana Jones, "I hate snakes!" Had I gotten that close to something ten times more venomous than a king cobra, I would have released a yellow cloud at some point during my frantic thrashing to move away.

Nah, kraits have tiny teeth and small openings for mouth. You'd practically have to force them to bite you. Ultimately, humans are a hundred times more "poisonous" than any cobra. To paraphrase IJ, "I HATE people!"