Claveria Lagoon Mystery Creatures: What ARE they?

Diving the Claveria lagoon area turned out to be a great experience. I do have to say though that the primary draw of the place is the underwater terrain--the grand canyons, the intriguing caverns and meandering fissures. It also turned out to be a good thing that we dove "the dead zone" before diving the lagoon, otherwise the sparse sea life of the lagoon would have seemed even more few and far between, especially after doing so much diving in the sea life rich areas around Puerto Gallera.


Even though the lagoon area was indeed low on bio-mass we did manage to see quite a bit of bio-diversity, although to find that diversity we had to work very hard. In fact, in between being continually stunned by the dramatic terrain visuals around us, we took it upon ourselves to search every nook and cranny for anything biological. And if it was something new, a life form that we'd NEVER seen before, well, THAT was a bonus. And lucky for us we had a LOT of those kinds of bonuses.

NOTE: For best appreciation of the underwater organisms below, I highly recommend you click on each photo for the full sized version. You won't be disappointed.
1. For instance, this round thing is shaped like a coconut and is about the same size as one. 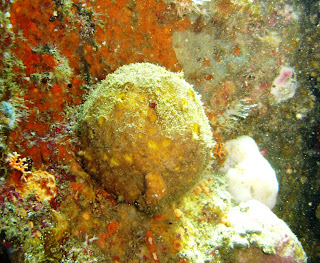 I found it attached up in the dark corner of a cavern. I have no idea what it is. And THAT is the theme of this post: Mystery Creatures. Or maybe I should call it, Can YOU tell me what this thing is?!

2. This mass of plump-polyped brown fuzz-covered anemones, and I'm only assuming that anemones is what they are, are like none I've ever seen. Too me, they look like fat chocolate noodle worms. 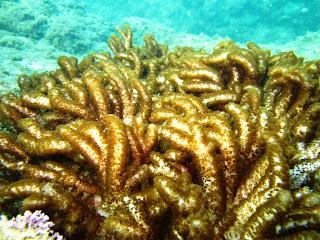 Today, when I showed this photo to my navy diver buddy, who has literally thousands of dives under his belt, he declared that they looked like "turd anemones." Hilarious, kind of. He's seen more underwater life forms than many marine biologists and yet he's never seen any of the creatures in this post either. There are more different species of animals in the world's oceans and seas than anyone can imagine, at least I never did until recently.

3. I spend hours on internet sites on marine species, pouring over hundreds of photos and STILL I cannot find most of the life forms I snapped in the scores of photos I took around the lagoon. These guys for instance, between 6 and 18 inches across, attached and exposed on rock walls throughout the area, they look like glass candy bowls, UNTIL you touch them and you realize they have the apparent composition of a Jello mold (see the youtube video above). 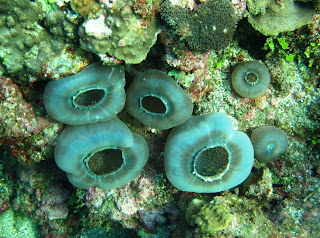 Get within a few feet of them and their gaping openings close reflexively, perhaps defensively. 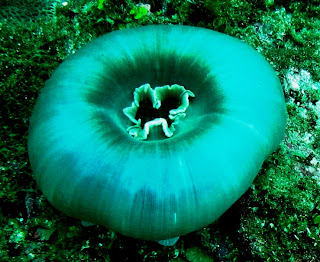 Touch them and it's exactly like jiggling a bowl full of jelly or a water balloon. I'm thinking though that they close up as a predation type action--maybe small fish, plankton, or whatever it is that they eat gets trapped and consumed. Who knows? I would love to find out. Because of their gelatinousness I thought they might be some kind of species in the "jelly fish" family, but there's nothing listed anywhere like these cookie jar shaped jelly like water balloon beings.

4. The first time I saw this stuff I was amazed at how brightly green it is. I mean NOTHING is this luminescently green, at least not in nature, not grass, not trees, not anything. Another incredible feature is its texture—it’s finer than baby hair. 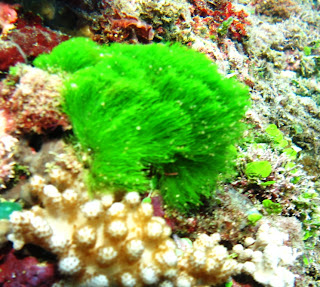 It’s so fine in fact that I could not quite capture its delicateness in any of the photos. It is so diaphanous that it moves in the most miniscule of currents; so, it’s in continuous motion. It never stops, and because of that it seems that the settings on my camera would not stop capture the fine detail of each thready tendril. Before I knew better, I would have assumed that it is some kind of sea plant, but now I realize that most things growing in the sea that LOOK like plants are actually part of the animal kingdom.

5. At first glance, I thought that THIS green stuff was the same as the green stuff in photo #4 above. Of course, when comparing them side-by-side other than a slight similarity in color, they are obviously not remotely alike; but that’s not what happens during dives when viewing items that are geographically separated. 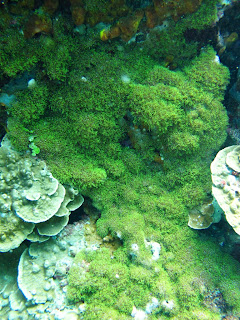 The normal mind, or in my case, the lesser mind, does not take in the nuances all that well DURING the dive. I saw the green color and made the incorrect connection—oops. Only later, when I went through all the photos did it become clear that they are two separate species. Compared to the vividly green angel hair stuff in photo #4, the stuff in THIS photo is shorter, rougher in texture and a much darker less glowing hue of green.

6. Ah, more jelly creatures—these transparent ones are even more fascinating to me than the translucent cookie jar style of jellies above (see #3). 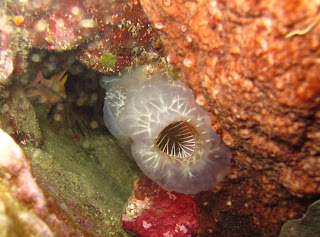 This type seems similar to its brother jelly above in that it also has an elongated opening, although it doesn’t seem to draw closed when approached or tampered with. What fascinates me is the visibility of its inner workings. 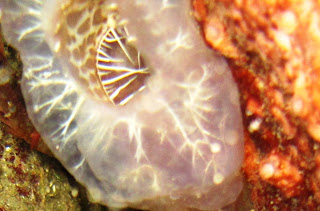 The opening looks like a predation trap, with the long teeth like spikes allowing smaller prey in but not out.

7. When I saw one of these bright red bows resting on a sea ledge some 40 feet down I swam over to it to retrieve it for disposal. Reaching for it I was disgusted, seeing it as an unwanted piece of gaudy human refuse contaminating an otherwise pristinely hidden natural world. 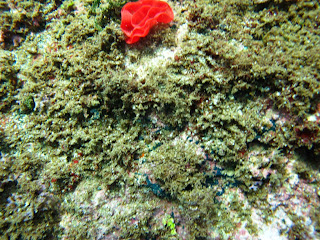 But when I grabbed a corner of it and tugged, it remained firmly attached to the rock. I took a closer look. Within a second I realized it wasn’t rubbish at all. 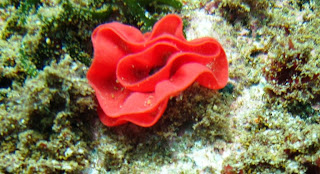 Once again, I came upon a form of life that I had never seen anywhere else. Even Tom, my retired navy diver pal was puzzled. I saw at least 20 of these bright red flower or bow like looking things scattered widely. They averaged between three and four inches across. I wonder what they are?


8. This one looks like a cross between raw meat and lettuce—the color of uncooked 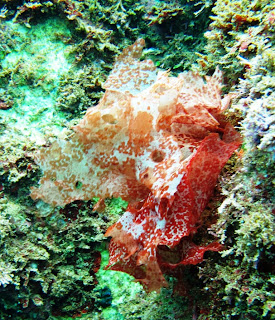 fresh deli meat with the shape of leaf lettuce.

9. Once again, I thought this lettuce looking organism was identical to the one above. They have similar color, texture and shape, but comparing them side by side in the photos tells the tale. 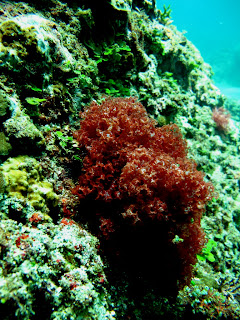 They appear to be different. I will assume that both are either a type of sponge or soft coral. 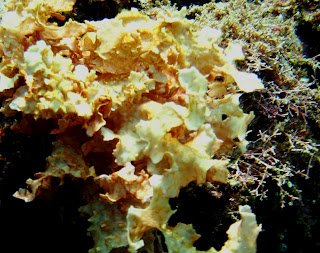 As I said, perhaps all these similar looking creatures that look like they should be in a salad bowl are some kind of soft coral or sponge. I’m at a loss, but I’d love to find out. 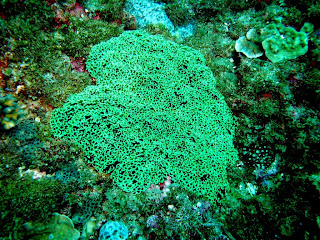 To me they also resemble a greenish mass of toad eggs. Each roundish disc is the size of a lima bean and the darker green shape in the middle of each one is shaped a bit like a kidney bean. So beans, beans, beans—jelly, Lima and kidney. 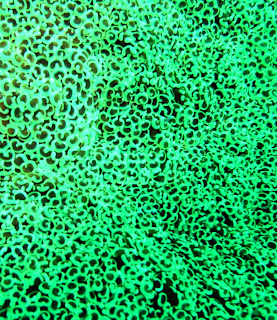 These soft masses seemed to inhabit warmer waters between 10 and 20 or so feet down. Each separate disc is loosely attached to the mass so that each one tends to undulate separately as slight currents pass through them. (See my youtube video above).

12. Until this moment I thought this one was a separate species from all the others; but now that I’ve more closely examined it I’m almost certain that it is prolapsed version of creature #3 above. I notice that it also has the rubbery bladder feel and look to it as the ones above, although it has three separate kidney shaped bladders instead of one round whole body. 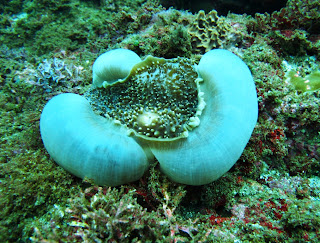 But what confirms to me that it is perhaps a damaged version of bladder jelly creature #3 is its warty center; looking closely, the warty brown and white material the same as the inside of the water balloon like creatures above (#3).

13. Whether this is something alive, like a hard coral, or maybe a kind of casting made by some creature to use as a dwelling, I have no idea; just as I have little idea what ANY of these organisms are. 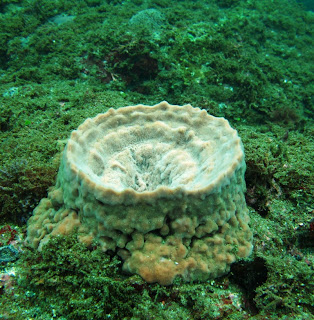 I may not know what they are at the moment, but I’ll continue my quest to identify them no matter HOW long it takes. It would be great if some marine knowledgeable reader recognizes them and lets me in on it. Now THAT would be fantastic. It’s why I numbered them in case I get lucky and someone clues me in. Please?
Posted by PhilippinesPhil at 2:57 AM