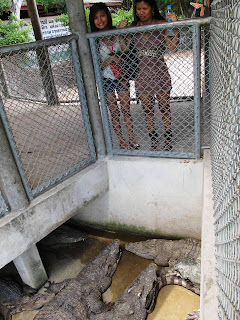 Read the previous post about our introduction to Pattaya’s Million Years Stone Park and you’ll know that we were immediately enchanted by everything around us. Crazily taking pictures or posing in them, the three of us in our little family group—my wife our teenage daughter and I—unconsciously veered up a path to the left, while Cynthia and Al evidently drifted off into some other direction. In Stone Park, the way the paths quickly meander around corners, it’s easy to lose sight of your fellow sightseeing comrades.


We noticed a small unassuming sign informing us that to continue would mean we’d soon be among crocodiles. Yes! Wanting to immediately press ahead, I paused instead, realizing that we had lost Al and Cynthia. At that point I was torn—should we reverse course to find them, or, should we continue forward and see crocodiles. What to do?

It wasn’t one of my finer moments. Instead of going back I pressed ahead. I figured we could just go a little further to check out how far the crocs were, and then we could always go back for our lost companions, after doing our part reconnoitering for crocodiles of course. 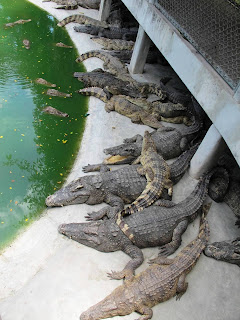 Well, I never did get around to going back after our lost people. Once catching sight of the ominously swampy green water and then all those crocs, I completely forgot about Al and Cynthia. I’m sorry; just lost my mind I guess.

I’ve seen crocodiles and alligators before in several zoos, mostly in the US and here in the Philippines, and every time I’m absolutely thrilled at the sight of them. The ones at Stone Park are the saltwater variety, the largest of all the world’s crocodilians. They have bodies as fat and rotund as turtles, their snouts are blunt, like battering rams concealing rows of teeth; but what really creeps me out are their super-sized eyebrow ridges. These vertical ridges make them look like malicious man-eating devils. Awesome!

There’s something about seeing a fellow apex predator up close that always reminds me of our original place in the food pyramid—eat or be eaten, kill or be killed. I know if I were down there with them that there’s a chance that they would make a meal out of me, and that, for me, always makes for a deliciously spine chilling realization. But what the sight of them really brought to mind was happiness, happiness that they were down there and I wasn’t. 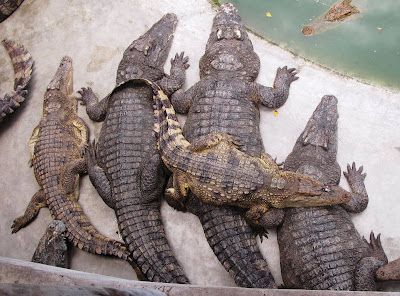 Janine wanted to feed them a chunk of chicken tied to a rope hanging off of a pole. For a couple bucks the lady at the counter handed over the goods. In the video my girl seems okay with doing it, but then the sight of the monsters only a few feet below is more than she can handle. So, I take over.


Apparently sluggish and mostly unmoving while resting in the sun, you’d never suppose that they might be fast on the attack. Actually, I did know how fast they are, having seen them in action on TV; even so, dangling my chicken cutlet over the rail just above the noses of my new reptilian friends, I was unable to accomplish what I wanted to. I had envisioned getting my money’s worth by spending at least five or ten minutes popping the meat up and down just out of their reach. But no, the very first croc that snapped at the chicken GOT the chicken. I give the thumbs up on the video but I wasn’t feeling it. Oh well.

Stand by for more on the other awesome stuff we saw at The Million Years Stone Park, like the elephant park for instance—my favorite!
Posted by PhilippinesPhil at 5:18 AM

Cool to read such posts! It's kinda funny since I came to Thailand 1.5 years ago and have been almost everywhere but didn't go to Pattaya because I didn't want to see the mekka of 'young girls seeks husband'. Reading such posts however makes me re-think this decision. Thanks! :)

Hello Sascha. Just checked out your Thai marketing site, pretty cool. Hard to believe you haven't been to Pattaya yet. Then again, i guess that speaks well of Thailand that there is so much more to do throughout the rest of the country. Pattaya is the ONLY place I've visited as of yet and the 11 busy days I spent there STILL was not enough. You really should go check it out when you get the chance. Sure, lots of bars and girls, but a family can have a lot of fun there as well. Take care and thnks for dropping by..