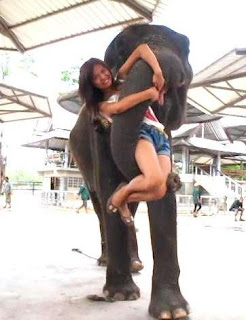 I don’t want to overdo the whole elephant thing so I’ll let this be my last on elephants for a while, at least for the ones I met at The Million Years Stone Park. Be warned though, I’m not completely done with them. A few days before our departure from Thailand I had another very personal encounter with a couple more. That was an incredible one-of-a-kind experience but we’ll save that for another day.

Janine, my lovely stepdaughter, had the adventure of her young life during our trip to Thailand. For her, as for all of us, it was more like a series of adventures. She surprised me in that I never would have given her credit for having the guts to do and try some of the things we put in front of her, but every single time she rose to the challenge.

For instance, I would have bet that she’d never go for allowing herself to be lifted from the ground by an elephant in its trunk, but she did it as you can well see in the first embedded video. Still, I’m not sure if she did all the adventurous things that she did because she wanted to try them or because she saw them as really cool photo opps for her Facebook page. That girl DOES like to be on camera. Proof of that is the ferocious white lion she modeled with less than an hour after she let that huge elephant boost her up.

I’ve watched the video of the elephant lifting my girl up at least a dozen times, not so much to watch Janine, although there is that, but to see how cautious that huge animal is around her, how totally self-aware it is. I mean look at how careful it moves around her. Sure, the trainer is there, but in reality he is only serving as a reminder to his huge protégé to watch his step. One lapsing moment with one of those giant feet, one careless swipe with that monstrous proboscis and my girl is either dead or horribly injured. Yet that was never going to happen. The animal was obviously enjoying himself and completely conscientious in controlling his giant parts around her. The more I consider it the more amazing I find it.

The second video “Elephants being Elephants” is a compilation of clips that I took there at The Stone Park Elephant Area. At the start you can see all of us just chilling out on the picnic tables completely content with just watching and observing.

In the far background are a couple of elephants with huge top mounted passenger seating. I was interested in giving that a try until I learned they wanted over $15 per rider. That seemed a bit steep to do something that didn’t look all that thrilling.

In video #2 I wander over to the far group of elephants when it seems they are becoming oddly active, or how about “active in an odd way.” The big one is rubbing his chin and tusks on the adolescent’s back and hindquarters. At first I think the two of them are doing some strange affection ritual and then much later, after I view the video about a dozen times, I realize that the small one’s back right leg is caught in the larger one’s chain. The big guy is so intent on getting the smaller one to stop yanking on the chain around his leg that he even ends up pushing one of his tusks up the little guy’s butt. If you listen carefully you can hear me giggling because it looks so weird to see that. At the time I didn’t notice that the little one’s leg was caught and I thought it was some strange sexual thing or something. But no, there’s no odd hanky-panky going on, they are simply trying to disentangle themselves.

At about 1.30 into the video one of the mature ones is entertaining himself by standing on a relatively tiny performing platform on all four legs. I have a bad habit of prattling on as I observe what I’m recording so pay no attention to my remarks as you watch, okay? In fact, go ahead and turn off the sound!

The one balancing up on the circus platform, even with one leg trapped to the ground by a chain, does a pretty good job up there. He changes position and when he decides to go to three legs he even alternates which of his three legs to stand on. It’s impressive to see this animal do this behavior with no apparent prompting from a handler or trainer. He just seems to be having fun, perhaps killing time like any human might. He even does something I’ve never noticed elephants do before on TV or film when he seems to be kicking his own swinging trunk with a foreleg. Now THAT is funny. His two companions to his front and back are both very interested in watching him perform and seem to be encouraging him as they reach out with their trunks and heads to touch him.


At just over 3.0 the smaller very active one appears to be purposely trapping the big one’s rear leg to the ground with one of his own rear legs, almost as if they are doing some kind of elephant Indian foot wrestling like we used to do as kids in the yard.


I pan back to the right where the one on the platform is still up there, but now he’s got just his rear legs on it putting his massive butt high in the air. The other one with his head in the sun facing away takes a moment to throw a chunk of pineapple plant over his shoulder at his buddy on the platform and hits him right on the tail. It’s a great no-look shot and right on target. Amazing.

At 3.40 the little one in the middle decides to sit down on his haunches, sort of rolling over on the side of one rear leg while the two bigger ones at his sides come over and butt him gently with their heads. You can hear me marveling at the silliness of it. Then he completely rolls back so that he’s sitting on the ground fully on his butt propped up on only his two front legs, at which point I exclaim, “What! What is he doing?” Evidently this action is forbidden and causes one of the seated handlers to get out of his chair and come over to put an end to the peculiar behavior. At the Thai man’s approach the little fella immediately gets back up on all fours. 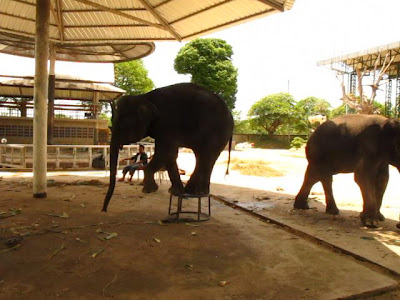 Is there any wonder I’m so captivated by elephants? I wish they came in much smaller sizes. I’d LOVE to have one!

Posted by PhilippinesPhil at 5:45 AM

I can't wait to try being lifted by those amazing elephants in Thailand. Pattaya and Bangkok are two of the most interesting places to visit if you want to have an awesome Thai travel!:)