Reluctantly, we moved on from the crocodiles. Continuing up the walkway, soon all thoughts of the scarily cool reptiles behind us vanished, instantly replaced with the remarkable sight of a yard full of pachyderms of the elephant variety, in this case the Asian elephant.

I have never been close to an elephant before and certainly have never touched one, but there below us at the bottom of some concrete steps through a gate I could see people, other tourists, being allowed to touch and interact with elephants as if at a child’s petting zoo. Yes! I couldn’t wait to get closer to check it out. The excitement generated by seeing the elephants completely took my mind off the aching in my feet, for by then, I was feeling a bit foot weary due to my chronically bad “dogs.”
﻿ ﻿I don’t think anyone there could take their eyes off the elephants. Truly, they have to be one of the most intriguing animals alive; and it’s more than about their gigantic size, they have so much personality, obvious intelligence and natural charisma. How can you not be drawn to them? Near the bottom of the stairs I put my cam on video and moved to get some closer shots of the awesome animals before me. It was hard to believe that the park would allow visitors to get so close to such potentially dangerous critters. I know from reading that all elephants are wild no matter how trained and tamed they might seem. I’ve also seen tape of captive elephants suddenly going rogue, attacking people and so forcing authorities to destroy them. 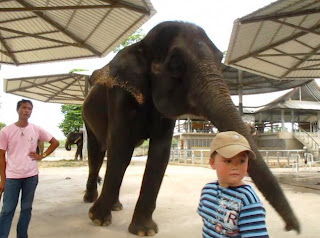 Yet here in front of me were ordinary people walking right up to them, touching them, feeding them, and interacting with them. I’m sure no park, circus or zoo in the US would ever allow the public to do anything similar; their corporate lawyers would never allow it, afraid of some stupid bit of litigation. No, you have to go to places like Thailand to have these kinds of experiences these days. In many ways, some of the best aspects of life in the US, the exciting adventurous ones, have been destroyed by lawyers, legislators and litigation.
Then again, looking at the video again (for like the 20th time), I notice that all the elephants are made completely safe by two things. There is the constant presence of handlers for one thing; the other safety device being the strategically placed leg chains that allow an elephant to get no closer to people than their trunks will reach. Of course that doesn’t stop people from getting close to the elephants.
In the first video notice the stern faced handler in the pink shirt. He is in charge of one of the larger elephants, I believe the same one that they use to make posed shots of people being lifted high in his trunk and standing under his whiskery chin. The second embedded video shows my girl Janine bravely doing exactly that. I’m glad not all the other trainers act like this pink shirted guy. To me, he just seemed to be meaner than necessary. About 1.40 into the movie he roughly pokes his large charge in the leg with his heavy wooden stick and then acts like he’s about to take a big swing at the big fellow.

I was disappointed to see him do that. But, I’m not an elephant guy, so maybe that kind of apparently severe handling is necessary to keep them in line. And it’s true that as I observed them, many of the elephants seemed to get fidgety and even edgy. I can’t really blame them though, being all locked up like that by a short chain to the ground. I’m sure I would act up a heck of a lot more than what I was seeing THEM do.
Just over 2 minutes into the first YouTube vid Divine shows up with a basket of little bananas she purchased for us to feed to the elephants. She hands it to Janine who stands there until the handler in the green shirt—who, by the way, seems a lot kinder than pink shirt, much to my delight—subtly prompts his moderately sized elephant to come on over and have some of our bananas.
Janine at this early stage in her association with the huge animals is too timid to try it, so, once again, just like at the crocodiles, she hands off to me and takes the camera instead. After watching me feed him a banana or two she got up the gumption to give it a try. I can’t blame her for being timid; the first time that proboscis comes at you it’s an eerie thing, kind of made me want to back up.
There is obvious communication driven by a high level of “smarts” going on in that giant brain. Watch ours as Janine nervously approaches him. He WANTS those bananas and signals that desire by repeatedly pointing his trunk at them followed by pointing at his mouth. Being near them, you can “feel” their intelligence, it’s hard to explain. It must be how the Green Peace folks feel after being around whales. Come in contact with them, feel their astuteness and you want to protect them. How anyone could kill one for “sport,” or even for food, is beyond me. We might as well be harvesting each other. I’m just glad the Japanese never developed a taste for elephant meat!
Our elephant did something strange with the bananas we gave him, although I didn’t pick up on it immediately. He takes each one, crushes them by curling his trunk around it before popping it into his mouth, I think as a way of pre-chewing them. At first I thought he was just playing with his food before I figured out why he didn’t simply pop each one directly into his mouth.
I spent a lot of time with the elephants. I literally could not get enough of them. I have more I want to talk about when it comes to these amazing beings but I don’t want this post to run on and on, sooooo… I think I’ll post in two or three parts. I’ll post the next one in a day or two with more pics and video. See you then.

Posted by PhilippinesPhil at 12:28 AM

This place brings a whole new meaning to interactive. Amazing what people can get by with in a country without lawsuits.

Although I have seen lots of those videos of tame elephants gone rogue, I don't think I would have been worried... unless I was the slowest person around!

Mr. Pink shirt also rubbed me a bit the wrong way. I would lay money down that he beats the elephants quite a bit with his stick. If one of the elephants went rogue, I would make sure I wasn't anywhere near that guy because I'm sure he would be target number one.

All that suing each other crap I've come to find out is almost strictly American. Wait til you see the stuff they let us do at Pattaya Park! You could never have a place like that back there. Lawyers and legislators have squeezed the fun and adventure right out of life in the USA these days. We ought to have a moratorium on all law schools. Nip lawyers in the bud.