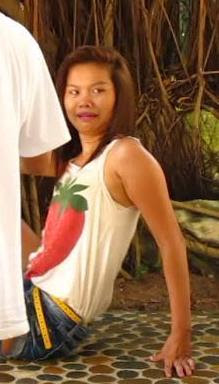 After watching crocs and elephants for a couple hours we moved on to see what other animal gems were available for us to see and experience. The Thais are big on the experience part. They’ve figured out that they can make a lot of extra baht by providing “up close and personal” with their critters. Like I said in an earlier post, there’s nothing remotely like it back in “Litigation USA,” unless you want the thrills of scratching lambs and ponies behind their fuzzy ears in a kiddy petting zoo.

Million Years Stone Park has an old fashioned zoo set up with caged animals just like zoos used to have in the states back in the bad old ugly days. I’m glad those are mostly gone. I admit that I wasn’t very comfortable seeing animals in cages. Truthfully, I can’t even stand to go into pet shops as the sight of animals stacked up in tiny cages nauseates and saddens me—sympathetic reaction I guess.

In the same zoo area are several animals with handlers where for a fee a visitor can pose with full sized fully toothed tigers (not sure if they let them keep their claws). There is an Asian bear as well, but that poor thing is so neurotic that I couldn’t stand to be around it. It constantly rocks and twitches like a mad man in an asylum. I felt horrible for it. I hurried by it hardly looking up, sort of like passing the bum on the street with puke on his shoes.

But then there is the white tiger, the star of the zoo and the primary subject of this post; well, him and my daughter Janine. At first I thought the huge white reclining tiger was just a stuffed display, it was deathly still, not moving a muscle. Then the handler poked the giant white beauty into elegant motion, which I think startled us more than it did the tiger. Impressed, we immediately decided to hang out there for a while. It’s not every day you get to see something so special.

Soon we began daring and prodding Janine to go up and pose with “tiger white, burning bright.” She was torn, torn between self-preservation and the intense need to take advantage of a super photo opp. I laughed; knowing full well that these days, with her, the photo opp side of her brain ALWAYS wins out; but this time, not quite. She was very willing at first, but as she approached and got the full effect of how truly enormous that cat is, fear began to get the better of her.

The handler is a hoot. In the video he plays off her terror, going out of his way to make it even worse by poking some skin-crawling toothy growls from that gigantic head. My daughter wasn’t impressed in the least at his attempts at mirth, but the rest of us thought it was hilarious. I love it when Janine smacks the handler like he is her misbehaving big brother.

Our very own Cynthia, obviously a naturally intrepid soul, goes first to show her “little sister” the way. Once her older gritty buddy does it and survives unscathed, Janine decides that she too can manage it.

Her first time modeling with “Big White” was nice but I wanted something more dramatic, something that included those huge meat rending teeth. So, for an extra 3 bucks, the comical handler with his continuously pushy manhandling manner, agrees to make it happen. 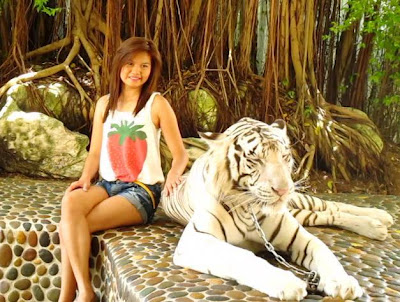 Until a few moments ago I didn’t realize how scared to death Janine must have been the entire time. I thought perhaps she had come to grips with the idea of being so close to the tiger, because in the moments that she smiles so wonderfully for the photo taking no one would believe she is anything but relaxed and happy to be there. But looking again at the video, I discover a look of sheer terror that pops out from behind the brave façade. So determined is she to make the pictures happen with the tiger that she is able to conquer that visceral fear and go through with the ordeal. Thus, I suppose the moral of her story would be, “if you want an act of courage from Janine, point a camera at her!” 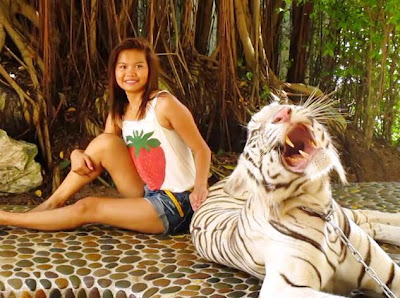 Janine’s intense fear aside, I’m sure that tiger is about as safe as a tiger CAN be in that situation. For one thing the chain holding it to the platform is short enough to keep the animal from easily spinning around at the person sitting in a pose at its rear haunch, especially with it strategically forced to lay with its back to the posing person. I notice too that just like with the elephants, the handler is ready to instantly intercede if need be. 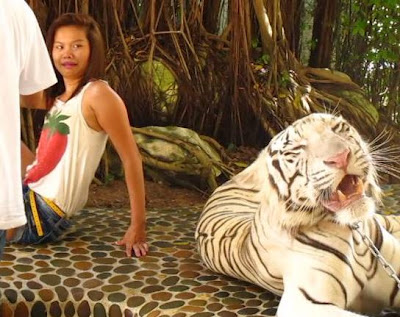 I’m sure also that the tigers, especially those used for picture taking, are all born in captivity and have been around humans for their entire existence. In fact, breeding tigers for zoos and shows throughout Thailand and even throughout the world is an industry in that country.

In fact I got to see an example of a “tiger cub mill” a few days later when we visited another zoo park called Tiger Park. There they have an entire building devoted to displaying their cubs where you can pay to bottle feed and cuddle tiger “kittens.” I didn’t do that but I have some awesome footage of a young but very aggressive tiger cub trying to attack me through its cage bars. One look at those bared claws and I was grateful as can be to have that cage between us. Check out the video below. Imagine a full sized hungry or angry one coming at you!

Posted by PhilippinesPhil at 5:50 PM

No freaking way would I do that. I don't care how short the chain. Of course, I hate having my picture taken so that part of my brain would never over take my self preservation side.

I try to be the one with the camera for the same reason.

What a horrible and disgusting act of animal exploitation for being abused for entertainment.
And many times these poor tigers abused and exploited to this,,so tourist can have their picture taken with them have been drugged.
Never would I visit such an place an support their acts of abusing these magnificent animals and the exploitation of these animals and to think of the poor bear you mentioned also animal cruelty.