Pattaya Trip, We "jump" off the tower

﻿We were late to rise our first morning in Pattaya having arrived at the hotel after 2 am the night before. The first thing we did before heading down for the free breakfast was to get the nickel tour by Don of what we could see of our surroundings from his balcony. His was on the opposite side of the hotel from us. All we could see of note from our balcony was straight down at the pool.


His room faced north, towards the direction of Jomtien Beach. At the time he pointed Jomtien out I still had no idea what that was. The most prominent things he pointed out—a large foliage covered ridgeline and a tall tower that seemed to loom from out of the top of the ridge right about where the ridgeline rose up prominently into a distinct mound of a hill.
﻿﻿
Enthusiastically, he described the wonderful view of the sea and the surrounding city available from the top of the hill summit. He described three separate parks taking up real-estate along the ridge, one park facing out to sea and dedicated to a long dead Thai admiral, and the other two parks arranged further back along the ridgeline, one he called “Buddha Hill Park” and the other “The Confucius Gardens.” 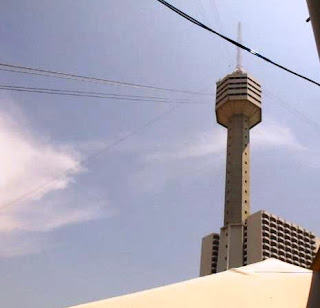 But what really grabbed my attention during his visual tour was the tower, not because it looked all that spectacular, as it didn’t appear impressive from where we were, but because of the wires he pointed out that ran steeply from the near the top of it all the way to the ground. They looked like guy wires to me, but he assured me they aren’t. We were so far away that I could barely see them, much less determine their purpose. I really wasn’t paying much attention until he said that before we left Thailand we would hang by a harness from just beneath the spire at the tower’s tippy top and then slide all the way down one of those wires directly to the ground. Now THAT caught my attention.
﻿﻿
We began speculating on who of us would have the guts to try such a thing. Don claimed that he and his girlfriend had already done it, so that was that. I knew I would do it, no guesswork involved there. So the question for me was whether or not my daughter and wife would try it.


I called them over and to show them the tower and the cables angling steeply to the ground, which were only faintly visible to us. Divine’s answer was immediate, “No way!” Janine wasn’t sure until I told her that Jenny, Don’s girlfriend, had already done it. After that, she too was in.
Days later, we finally got around to that part of our busy agenda, the part where we spent most of the day at Pattaya Park, the place where the tower is located. There are other things to do at the park, like the water park, but doing “the tower jump,”—which is what they call sliding to the ground in a harness from the top of it—was our first priority.
﻿﻿

The cost for each per person is like $12 or $15, so we wanted to make the experience last as long as possible. We bought our tickets at the counter on the ground floor and took the elevator up to I think the 50th. I’m not sure exactly now. I believe it’s just below the revolving restaurant, but then again maybe it did revolve slowly and we just didn’t notice. That floor is more like a snack bar viewing platform. The cost of each ticket includes a free drink, so I grabbed a juice and we all claimed a large table to put our drinks and drop our bags. After that we all enjoyed the spectacular view, walking around in a circle to take in everything around us, all 360 degrees of it.
Forty-five minutes later and we were stoked to go up to the apex floor where we would select how we would ride back down to the bottom and then DO IT! There are three ways to go down: strap into a parachute harness and ride the wire down; or, you can step into a mini platform cage that tightly encloses your body and gives you something to stand on while you descend; or finally, the old lady way, an enclosed barrel shaped gondola big enough for several seated riders. As for me, there was no way that I was going down in anything but that harness.


In the first video I walk around the entire perimeter of the outside platform, the apex floor. Looking straight down from over 500 feet up is a dizzying thing. Pointing the cam over the edge and seeing nothing but the ground below, you will see no suicide prevention devices, in other words, nothing to prevent idiots, intent on doing harm to themselves, from jumping if they have a mind to. This apparent lack of concern from the park owners about frivolous lawsuits once again reminds me of how messed up my own country has become, where businesses have to be so mindful of malevolent lawyering that fun stuff has become too cost prohibitive to exist anymore. Thank God for places like Thailand. On that note, you want to screw up a good thing? Put lawyers in charge of it. Case in point—the United States at present.
I decided to go first so that I could video everyone as they came down behind me. I handed over my ticket indicating I wanted to ride the harness. The boys stepped me into it and once all strapped in they took me to a hook where I could be dangled by simply lifting my feet off the ground. I’m pretty sure they do this mostly to give the person confidence in the rig more than anything else. I didn’t just dangle; I slammed myself hard just to make sure I was held solid. After the third time though, the Thai fellows in charge got a wee grumpy at my antics. ‘Sorry.’

About to walk up the stairs to do my downward ride slide I began to notice a few butterflies in my midsection. Then my wife asked me for my wallet. That broke the nervousness as it gave me the opportunity to say something funny, “Oh I see, so if I die at least you’ll have my money! Good thinking!”

The attendants go at it quick, not giving you anytime to think about it. I stepped into the cage, I felt them hook my harness in, they told me to grab the handle above my head, the door in front of me opened, and then nothing but space beneath me. It’s an amazing feeling. I have to say the best part is right at the beginning when you are staring at death in the face, but you KNOW not really.
Once the ride starts all there is to do is to take it in. The only problem with the ride down is that it’s over before you know it. The ground started to come up at me a lot faster than what I was expecting. I began to wonder how I was going to stop and if it would be unpleasant. And I’ll warn you right now, it is not a smooth landing. You hit the end pretty hard, jouncingly hard. There is a guy at the bottom that catches you a little, but his primary task is to get you out of the harness quickly so that the next rider doesn’t slam into you.
All in all, it’s an amazing experience. If you are in Pattaya, you MUST do the tower jump at Pattaya Park!  Anyway, in less than an hour we take off on our next adventure, a scuba expedition in the uncharted scuba waters off of Claveria. See you when we get back...

My stomach and heights don't cooperate very well. I'm not sure if I could get my mind to allow me to do something like that or not. I blame that part on being an engineer.

I'm sure in Thailand since they don't have lawsuits, they aren't required to tell you about the last harness assembly that broke dropping the occupant to the ground.

Yes Ed, very familiar with engineers from time as a tester. Thats why I slammed the hell out of mine multiple times before I even stepped out over the edge. I would think though, with your hiking locations being in some very mountainous areas that you would be somewhat inured to heights. Anyway, I'm outa here. Scuba trip time! See ya! oh, i'll check your site real quick before i turn off the laptop.

I think trying this tower jump at Pattaya Park will make my Thai travel more engaging! I'm ecstatic to go to Thailand!:)