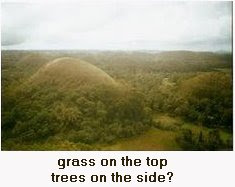 After our stop in Loboc we continued north toward the town of and the “famous” Chocolate Hills. The changing views outside the car and the interesting conversation going on in it kept boredom at bay. The drive is up, down and around because of the hilly terrain. The road surface is smooth and the traffic light. The hour-plus ride from Loboc passed in a flash.

From road level a first time visitor probably won't realize they have entered the Chocolate hills area. In effect, you can’t really see them all that well from inside a vehicle. So, without knowing that we were already driving through them I looked off to the right and saw something manmade way up on the side of a rounded hill. The structure was stark white and contrasted poorly with its beautiful natural setting. Moments later we came to an intersection and turned right. I realized then that the ugly white building visible way above us was our destination. Whoever designed the and Lookout, known as the "Chocolate Hills Complex," should have made it blend in with its surroundings — currently it’s an eyesore, a visual blight and the unsightly thing should be repainted and landscaped to hide it.

High up on the hill, the driver dropped us off at the circular drive in front of the hotel--this parking area is busy with automobile traffic and locals hawking their wares to us tourists. Our guide handed us tickets and pointed the way to a gate. She told us to take a half-hour to scope out the view at the top. Surrendering our tickets we passed through the gate and headed to the top of the lookout.

The stairs are straightforward; they take you directly up from one small resting plateau to the next. Each plateau is a landscaped mini-garden with seats and some with shade, and each has a viewing area where you can pull away and gaze while you catch your breath in comfort.

I opted not to stop at any of the plateaus. I didn’t count them, but there must be two or three hundred steps, it felt like a thousand. Ten years ago I could have sprinted them, but 50 pounds later along with the onset of tendonitis and arthritis, I was lucky to slowly trudge my way to the top. Trying not to appear too done in, I went for a nonchalant pose while my heart pounded and my lungs pulled in half the air of . I found a vantage point and exulted in the astonishing view while recovering my breath. 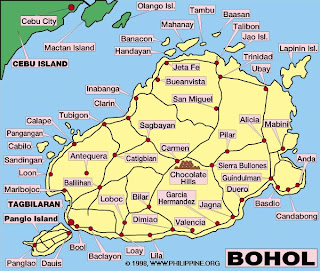 The whole point of the Chocolate Hills is their outlandishly wonderful strangeness. If there weren’t so many of them plus the fact that they are so substantial, one would suppose them to be manmade. Suspiciously, they don’t LOOK natural at all; they are just too flawlessly homogenous. Mother Nature does not normally use a cookie cutter when she shapes her geology, but she sure did on . In other words The Chocolate Hills are just too seemingly perfect, too good to be true and that is much of their attraction.

(I just did an image search of The Choco Hills and after viewing a few score of them I now realize that the hills are NOT all the same. They vary in size and some are not so perfectly rounded and sport a visible peak or pointed apex).

There is a tarnished plaque at the top that purports to explain how the hills were formed over the last couple million years. It’s a series of pictures in a storyboard arrangement etched into a large bronze plate. It shows a shallow seafloor of coral rising high up out of the water. Then, by the action of weathering and erosion, this exposed coral bed gradually separated out into the hundreds of perfectly mounded (some not so perfect) hills we now see. All well and good to the average sightseer, but not nearly good enough for me!

There’s nothing on that plaque that explains WHAT exactly was so different in the hill-shaping process on that could have possibly caused the formation of THESE particular unique mounds. As far as I know there’s nothing else like them in the world, maybe similar, but not EXACTLY like them; and they ARE indeed unique. They are many and they are HUGE; their massiveness is easy to overlook as you gaze out at them, UNTIL you remember that you are standing at the top of one them, and THEN you realize how truly enormous and spectacular they really are.

Another unique aspect of the Chocolate Hills is the apparent lack of tree growth on them. After all, if trees WERE able to take root and obscure them then they would NOT be THE Chocolate Hills. Only grass seems to spro 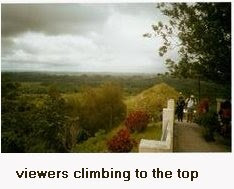 ut on their roundedness and from what I could see, it does so thickly. I suppose the locals could be conspiring to keep trees from growing on them by keeping them cut back, but I think that would take an incredibly concerted effort. Still, they might be doing this to maintain their unique appearance. Trees do grow quite readily on the rest of the hills throughout , so unless there is something about the soil on the Chocolate Hills that keeps them tree-free I have to wonder if the hills aren't "maintained." By the way, the hills get their rich brownness from the grass covering them. When the rains stop, the grass loses its new-growth green and becomes chocolate brown, especially in certain lighting conditions such as morning and dusk.

On the day I visited The Chocolate Hills, as luck would have it, the sky was hazy and spritzed the occasional rain drop. Visibility was limited, perhaps only one or two miles, giving the hills a washed out mystical appearance. They faded from view and yet seemed to go on eternally as my mind assumed they continued on into a misty unseen distance.

Trying to take in every possible view of the hills stacked up into the vastness around me, I continually moved around the top of the 360 degree ring of the upper sightseeing area. From the north side I looked down into a tiny valley formed between the Chocolate Hill I stood upon and the next hill over and I observed a supremely pastoral sight—a farmer plowing a rice field with a single caribou. He wore a traditional conical hat and in fact everything looked “perfectly” traditional, right down to the small bahay kubo (rural Filipino bamboo house) sitting in a grove of bananas just to the east of the rice paddy. The whole scene was so quaintly whimsical that I became convinced that it was entirely contrived (and so what if it was!). 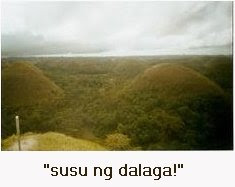 A middle-aged Filipina tourist visiting from some other province approached the top of the last of the steps, and breathing heavily, blurted out an exclamation, “Susu ng dalaga!” I was surprised she said it, since some might consider it to be mildly inappropriate, but she was absolutely correct. The hills do indeed look like the perfectly rounded perky breasts of a young woman. In fact, I was a little shocked that the comparison hadn’t occurred to me!

During my circuit of the circular lookout sidewalk I passed an older Filipino fellow in his 60s and nodded a hello to him. When he hello’d back I immediately recognized him as a fellow American. We got to talking and I found out he was retired and visiting from his home in . I found it interesting that although he had spent his early years in he was only now making his first trip to the Chocolate Hills. He said they weren’t accessible back then for lack of a passable road. It causes me to ask the questions: ‘Were The Chocolate Hills deemed worthy as an attraction only AFTER roads were built into them; and did Filipinos know of them and their unique beauty even before anyone could readily visit them? When did they become "World Famous?’

Time got away from me and I realized I needed to get my butt back down the hill. The switchback "down-walk" is separate from the "up-walk," and it got a little slick from raindrops now falling with more frequency. Almost at the bottom I stopped at a religious grotto devoted to the Virgin Mary. It gave me a chance to look more closely at the geological makeup of the hill. The grotto had been chipped more than 5 feet in allowing me to see that the hill was composed of some very solid reddish coral; it seemed very dense and very hard. If all the hills are similarly made then perhaps that explains why no trees grow on them? I'm still not entirely convinced that they haven't cut the trees down from the tops of them over the years.

There’s a great thing about sites involving outdoor settings such as The Grand Canyon, , and the skyline. Every new trip to those grand places almost certainly results in a freshly different and memorable perspective. So many factors affect what one sees in the great outdoors—clouds, light, time of day, 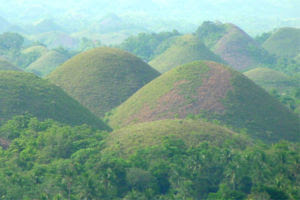 time of year—what is seen one day will have a new look the next trip. This is certainly true of the Chocolate Hills and it makes me look forward all the more to my next visit there.

The guide wanted us to get moving. During the return drive south I learned that we had a lunch reservation back at Loboc and we would have to hurry to make it. I didn’t realize it, but our lunch in Loboc would rival the beauty we had just seen from the top of that chocolate hill… Stay tuned….

Posted by PhilippinesPhil at 5:51 AM

I have a book on Filipino folklore and legends and if I remember right, there is one legend that says two giants were fighting each other and throwing rocks at each other. They tired of their battle, became friends and left, forgetting to pick up the rocks and thus the Chocolate Hills were born.

If i was going to create a folklie, i mean lore, i would make it giants all right, but it would be their kids. See, these giant kids made these huge mudpies that dried hard in the sun and eventually became the chocolate hills... Because that's what they look like, big ol' grass covered mudpies.

Ed: brushing up on Filipino floklore, eh? Yep, that's what the teachers told us too back in grade school!

You made me envious again, Phil. I've never been to Bohol. I have been to Puerto Galera though, and recalled your wonderful trip there. But it was the Holy Week so prices were quite high and swimming is not exactly in my list of skills so I just imagined how it was like in your place when you found the underground cave as we snorkeled about.

I had to smile inspite of myself. Or should it be, inspite of yourself? hahaha. Your inquisitive mind trying to demistify the chocolate hills. Makes me want to see the marvel too, if only we had the time and resources.

Well Wat, they've been there for millions of years so they ain't going anywhere buddy... Put 'em on your list by all means!