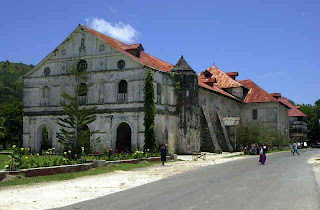 I remarked in an earlier post that the first thing a visitor notices in Loboc is the strange visual conflict between the unfinished Loboc River Bridge and the Loboc Church and that is true; but I also said there were other more charming, less alarming things to see (and do) there—for instance the church itself.

The is typical of many of the centuries-old mini-cathedrals built under the direction of the Spanish friars who mostly controlled the archipelago right up until 1898. Muslim attacks on the Bohol's southern coast in the late 1500s and early 1600s forced the priests to look for shelter far inland. They found it by going up the to the spot where the present church stands.

Until I moved here I hadn’t realized that much of what is now the was dominated by Muslims. When the Spaniards arrived, except for the southern islands, they mostly managed to replace Islam and the local animist beliefs with their own brand of aggressive Catholicism. They never had all that many of their own troops out here, especially during the early days, so the friar orders managed to do their conversions generally through priestly “persuasion” and persistence. It’s interesting to know that back in around this same timeframe (early 1600s) that King Philip was expelling thousands of Morisco, the descendants of the “Christianized” Muslim Moors then still living on Spanish soil. The centuries of war and conflict with the Iberian Berber Muslims had a huge impact on the Spanish psyche and probably had much to do with the way they steamrolled over all the peoples they colonized. 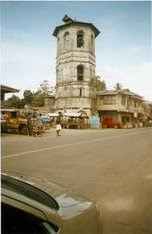 Another distinctive architectural oddity concerning the , the other being the bridge, is the bell tower. Oddly, instead of being a part of the main church structure, as it would be in any other church anywhere else in the world, the bell tower in Loboc was built separately well away from its partner building. On the bank of the the round castle-like bell tower prominently sits across and down the street from the church. According to Wikpedia, this freestanding tower was built by the Augustinian Recollects who took over from the expelled Jesuits in 1768.

When I first saw the tower’s disconnected location on the banks of the river, to me it looked defensive, as if it was intended as a lookout for sentries guarding the town. I asked the guide the reason for the unique location and separation of the tower from the church—she responded that the reason was acoustical—that the sound of the bell would travel for miles up and down the river and so carry to more parishioner ears. By 1768 I doubt that the Muslims were still much of a problem, if at all, to the population of , so the tower was probably not built as a defensive structure as I first thought.

I walked around the outside of the large church and examined its building style and architecture. Like most of the centuries-old Catholic cathedrals here Loboc’s is in need of 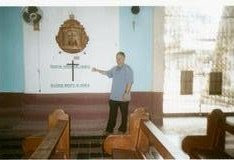 plenty of preservation type work. The one at Loboc needs paint and lots of structural upkeep. Even stone and concrete has a limited wear time, especially considering how nature takes its annual shot during flood time. This historical fact is displayed by a painted horizontal line about 5 feet up on an inside wall. Over the centuries the river has flooded continually over its banks, the worst in 1876 which is marked by that spot high up on the wall.

Attached to the south side of the church is a now vacant 3-story convent, also built by the 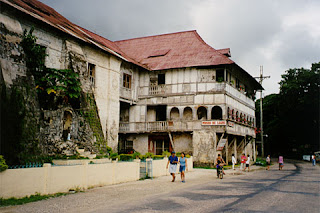 Recollects as part of their refurbishment of the original Jesuit-built church. The old convent is now used by and large as a museum. It costs a few pesos so take a few minutes and check it out. Part of the museum is devoted to the award-winning Loboc Children’s Choir started in 1980; but the choir is only a relatively recent manifestation of Loboc’s long history of musical know-how, which has been part of Loboc culture since the time of the Jesuits almost 400 years ago. This part of the museum has displays and exhibits e 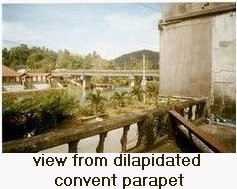 xplaining the musical history of the town. Most of the old musical instruments on display are a bit of a joke though; they look like dirty tarnished broken junk pulled from a refuse heap. I’m sure it’s the best the curator could find, knowing how people here hold on to their family heirlooms and treasures.

In my explorations of the dozens of old town churches I’ve often seen the pulpits high up on the side of the walls. The one in Loboc puts the speaker exceptionally high, at least 12 feet or more above the parishioners and I could not resist the temptation to climb up the steep wooden steps and deliver a pretend sermon. The pulpit in the Loboc church still has its ornate cover and as I spoke I realized that the cover was not merely for show—it had a definite acoustical purpose. That fanc 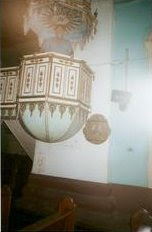 I don’t know why, but lots of modern tourists don’t seem to feel comfortable visiting and exploring these old Spanish-designed, Filipino-built churches and that is truly a shame. To get a true feel for the history and culture of this country you really should examine these ancient edifices. Most Filipino towns and villages are quite proud of them; and if you can, see if you can get a local 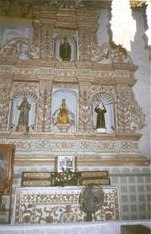 layperson or priest to show theirs to you. The story of each is fascinating and many times there are hidden relics, or locked passages and rooms not usually open to the casual gawker. Ask lots of questions and you are sure to hear intriguing stories and human-interest accounts that you otherwise would never have imagined existed. And by all means, donate to the upkeep fund. Of course, knowing the , just because you are told that your money will go to that purpose, unfortunately, chances are likely it won’t. Just the same, I still give, just in case.

Posted by PhilippinesPhil at 7:15 PM

My grandparents on my father's side came from Ubay, and owned mostly Onion, Ubay, Bohol. I have only visited that part of the family two times in my entire life. I do remember this church from one of my little tours way back when.

There is at least one other church in the world with the bell tower separate from the church because I go to it every Sunday. It isn't on a river and was built thirty years ago so I doubt if accustics or defensive reasons play into it. I always thought it odd though.

A lot of churches in Italy have the bell towers separate from the churches. I've seen a couple of them here in the Philippines too. One is in Vigan, Illocos Sur. Funny, it's so far from the church that a street runs between the two structures.

Because you are so well-traveled Alec, it makes sense that you have seen plenty of examples of stuff that I would think out of the ordinary. You've seen it all buddy. Thanks for straightening me out. Alec... Question? Were there any explanations similar to the one for the bell tower in Loboc? BTW, it is also sits across the street and down from its "mother" church like the one you saw.