Bohol Trip: Lunch on The Loboc 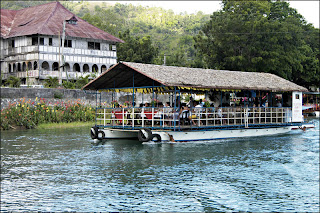 The restaurant boats are unique; I’ve never seen anything like them. They aren’t really floating restaurants so much as they are floating dining rooms. Each dining vessel is covered to provide shade and very stable because of their large size, maybe 40 feet by 15. In the States we call them party barges, except the ones at Loboc do not have any means of self-locomotion, no outboards and no inboards.

To build the big flat boats it looks like they take two bangka boat hulls side-by-side and build a platform on top of them. Pretty good idea—they take resources already on hand and convert them into what they need—brilliant, and very Filipino.

They use a seemingly ungainly method of moving these large sightseeing dining barges up and down the river. Its simple but it works. They push them with a powerfully motored separate

bangka boat. The captain of the pusher boat can’t see where he’s going because of the bulk of the barge he’s pushing to his front. It’s very similar to the way Charles Lindberg flew his Spirit of St. Louis, able only to see out the side of the aircraft. It must take a lot of practice learning how to safely and smoothly manipulate their craft in this manner. It doesn’t hurt also that they go very very slow. As a passenger you aren’t even aware that all this going on behind you just as it should be.

Being late turned out to be a good thing. The rest of the tourist diners were on the way and they were delayed, just as we had been. It was to our benefit because we had first crack at the food and our choice of seats. I took a place at a dining table all the way to the front on the port railing near the food table.

It was quite a spread. Watermelon slices, my favorite, along with a host of other fruit cut up on platters. There was a complete sampling of Filipino fare—BBQ marinaded pork on a stick, rice, chicken, ribs, two different kinds of pansit, lechon and more—everything you would expect to find in a local restaurant. Lucky me, Filipino food is my absolute favorite. But, you might want to bring along extra drinks since they only stocked enough cokes for less than two per passenger.

Refreshingly, unlike many other waterways in this country, the river is free of debris and it’s clean and inviting. The that day was slow moving and brownish green with a hint of turquoise. It looks safe enough to swim but like any body of water with nearby human habitation ensure you don’t ingest of any of it. 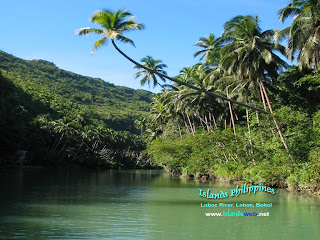 By the time our fellow diners arrived we were almost finished with our first helping. A musical combo consisting of two girls performed pop favorites for our listening pleasure. Both sang, and well; one played guitar, the other keyboard. Happily, they kept the amp volume down so that it didn’t overpower conversation. I only mention it because usually locals tend to turn volume knobs as far to the right as possible (go to any karaoke bar and see what I mean)—another irksome national tendency.

Once everyone was onboard, the dock and deckhands untied the boat and pushed us on our way with long bamboo poles. It felt good; actually, it was downright exciting to be finally moving up the river. From the very beginning, a sense of contentment and tranquility pervades your soul. And Romantic! In a word, that is how I would describe what its like to travel the Loboc on these dining boats. Guys, take your favorite gal with you because it’s the only way to experience the hour plus voyage. If you are by yourself, as soon as you start to experience the loveliness that is the cruise you will wish you had someone to enjoy it with.

In no time at all we passed by the town, first under the unusable unfinished concrete travesty of a bridge and then under the more modest useable one. The river meanders through several slow turns. For the first part of the trip the bank is shadowy and well foliaged with the occasional man-made structure faintly visible through palm trees and thick vegetation. Further on, steep hills, also well foliaged, rise high above; curiously you find your eyes drawn to them and then to blue and white tropical sky above that. It is the perfect combination of inspiring nature and modern comfort. It doesn’t get any better. I loved the quiet peace. Back home it would be impossible to enjoy such a setting; Americans insist on tearing through ALL bodies of water on jet skis and powerboats. For most of our float tour we saw no other craft or even people—it was just us and nature.

When the river becomes impassable you know you have arrived at the . We pulled over and tied up at a tiny spit of a land upon which was built a bamboo kubo. In it, a half dozen older Loboc men sat close together on wooden benches showing off their musical talents. They played lively tunes on banjos, guitars, horns and woodwinds. We stayed there for 15 or 20 minutes enjoying the band and the view of the falls. I dropped a couple hundred pesos in the band’s collection can. They were okay.

To call them a falls is a bit of a stretch. They “fall” barely more than a few feet, but at least it sounds like a waterfall and it does provide a bit of scenery, although nothing spectacular. The real beauty is to be seen on the river getting to them. 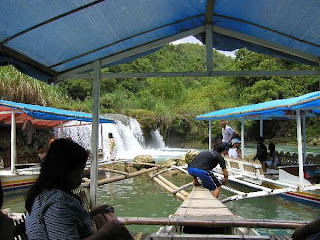 The return trip is not nearly as magical, mostly because the element of anticipatory surprise is lost; what’s to be seen has been seen, only now you get to see it from the other side of the boat going in the other direction. And, it’s a little sad knowing that your beautiful sojourn on the water is about to end.

If you sign up for any tour out of Tagbilaran or you will take this dining cruise. Truthfully, it was the most enjoyable part of my little trip to .

Posted by PhilippinesPhil at 11:22 PM

There was a movie released a couple of years ago-- one of the few in which the dialog was in Visayan-- called, I think, Panang Hoy ng Suba (cry of the river) in which the Loboc provided the scenery. A great movie though I couldnt understand a word. Hope to make the trip soon, your descriptions are really inviting. I would like to see my old friend Paul Bruno at the New Powder Keg and help his San Miguel sales for this month...

Paul's new Powder Keg on Panglao Island is doing well, although I can't drink beer anymore his pizza is great.

I was here! I think I have the picture somewhere...that was like 5 years ago.

the movie is "panaghoy sa suba" with cebuano as language

good thing I can understand a little cebuano and japanese too :)

also loved that place. a river so clean...

that bridge hasn't been built then

I wonder when it was built. For some reason bridges and buildings look ancient here by the time they are finished....?