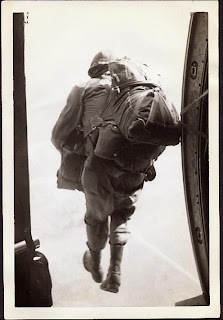 The reason for George's "uh oh" is that normally at the “one thousand and three” count the chute would snap open with a violent jerk and he’d start riding it to the ground. This time, in the split second before he got to “four” he knew instinctively something was wrong. Sure enough, in an instant he could see nothing but the inside of his helmet. His head was being forced down so that his chin was firmly clamped to his chest.

Trapped under the confined darkness of his tilted helmet he felt his body land on the side of one of his fellow jumpers’ chutes. He fell down the side of the chute, partially collapsing it, before falling freely away again. Immediately he felt himself fall into another chute only this time he merely glanced off it before continuing his plunge.

He tried to push his helmet back up, but it would not go. He managed instead to push it far enough to the left to see with his right eye. Through his now uncovered right eye he saw that he was falling almost horizontally on his back with his feet slightly lower than his head. In this position he could see above him that his chute had malfunctioned in several critical ways. 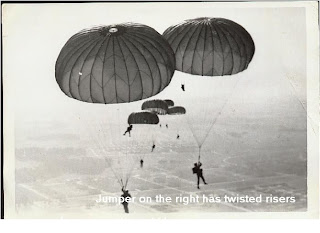 Coming out of the “sock” the suspension risers had twisted into a thick rope all the way up to the canopy. It was the thick bulk of those twisted risers that was forcing his helmeted head as far forward as it would go. There was no way he could resist it.

He could see the canopy was involved in a complete inversion. Here’s how Wikpedia describes parachute inversions: (An "inversion" occurs when one skirt of the canopy blows between the suspension lines on the opposite side of the parachute and then catches air. That portion then forms a secondary lobe with the canopy inverted. The secondary lobe grows until the canopy turns completely inside out.)

George also saw that the inverted chute was folded at the middle into the worst “Mae West” that he had ever seen.

Wikpedia: (A "Mae West" is a type of round parachute malfunction which contorts the shape of the canopy into the appearance of a brassiere, presumably one suitable for a woman of Mae West’s proportions). 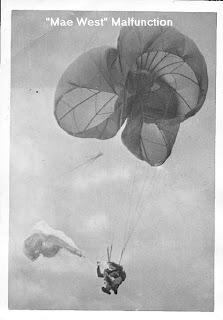 Unfortunately, in George's case, instead of a full blown “Mae West” there was hardly enough unsnarled canopy above him to form even a training bra.

In another split second the canopy laid horizontal into a “cigarette roll,” defined as:

(The parachute appears as a vertical column of cloth (in the general shape of a cigarette), providing the jumper with very little drag. It is caused when one skirt of the canopy, instead of expanding outward, is blown against the opposite skirt).

In a fraction of the time it takes to tell it, George saw all of this through one eye and realized there was nothing he could do to correct it. He grabbed the rusted red handle of his reserve and pulled. To this day he remembers that the army warned them repeatedly that if they lost that handle it would cost them $6.75. Even in his dire predicament he was concerned about not losing it; but that worry was immediately forgotten as soon as he yanked it and nothing happened.

Normally, upon pulling the reserve handle located on his front, a jumper expects a small pilot chute to deploy, which upon filling with air draws the reserve canopy out after it. To his alarm, George’s reserve chute apparently had no operable pilot chute. Upon a hurriedly frantic inspection, instead of a carefully folded chute rubber-banded into place, all he saw was wadded-up squashed silk. His next thought was to start pulling it out of its canvas pouch with the aim of finding a skirt edge to try to get it to catch some of the air whistling past him.

Keep in mind he had jumped at just 1250 feet, so all this happened in the blink of an eye.

Frenetically, George pulled the clumped silk from its ancient canvas container. As it spilled out it gathered on both sides of his body and between his legs. All this flapping material around his body caught the wind causing his legs to fly up even higher, to about 45° above his head. He unstuffed and unstuffed, searching madly for an edge.

He lost all hope of getting his reserve to open however, when instead of an edge he came upon its apex or exact top middle. He knew then that inexplicably, there WAS no pilot chute, and he understood also that it was hopeless to try to get the chute to blow up.

At this point he remembers purposely trying to direct as much of the slick fabric up under him with the crazy notion of forming a cushion to land on. Again the attitude of his falling body changed so that now his head became higher than his feet. 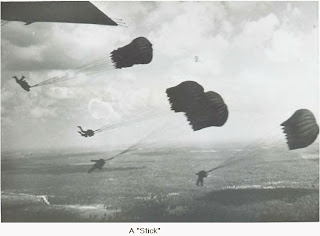 George continued to plummet to earth. In the jumper vernacular he was known as a "streamer" because his double-malfunctioned chutes weren't providing any lift and instead were just "streaming" after him toward the ground.

Posted by PhilippinesPhil at 2:00 AM

Two more reasons why I like my feet planted firmly on the ground. Can't wait for you to give the third reason.

As you read on you'll find that gravity was the least of his problems.