The ambulance drove off. In his peripheral vision George saw a soldier walk over to him and then kneel at his side. The man checked for a pulse at both wrists and at the neck. He took a small signal mirror and held it to George’s nose and mouth looking for any sign of exhaling breath. Evidently finding no sign of life, he unhooked George from his equipment before once again checking for a pulse at his wrists and neck. He even laid his head on George’s chest listening for a heartbeat.

“I remember him looking down at me and he had a real sad look on his face” says George. “He walked away for a time, but then he came back and for the third time checked me for a pulse, and still he found nothing. He walked off again and then I thought, ‘I guess I AM dead, but a dead man can’t see… I have got to MOVE!”

George was literally trapped inside his body. “It was like I was tied down in every sense. I tried and tried to move but I couldn’t. Then the thought of my wife and baby daughter filled my mind. I struggled even harder to move and then “BING,” suddenly something “let go” and I found myself popping over from my back and unto my knees.”

Hearing the commotion, the old soldier hurriedly returned. Like all SF troops, he wore no rank or name tags on his fatigues, even so, George assumed the man was an officer because of his older age and air of command presence. George laughs when he tells it, “When he saw that I was suddenly alive after all, his eyes got as big as I’ve ever seen. He was in total shock. I was moving back and forth trying to collect my equipment, but I kept falling over.”

Later, George isn’t sure how much later, he found out that the older officer was none other than Colonel Aaron Bank, the famous founder of the Green Berets. If indeed it was Bank and it probably was, he told George, 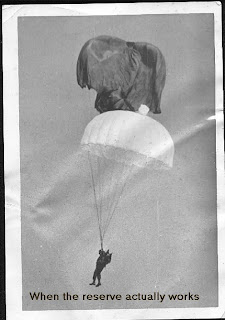 “Soldier, lie down and don’t move.”

He wasn’t about to lie still and let that deathly paralysis take over his body again and adamantly rebuffed him with a, “Go to hell!”

Haltingly, painfully, George continued to look for his equipment, but in his befuddled state he could find none of it and all the while he kept falling.

“Kiss my ass!” George responded. (Although other Special Forces troops who were there say that he actually said something even MORE forceful—and it rhymes with “pluck dew.”)

The colonel could see he wasn’t getting anywhere with this contrary “Lazarus” and gave up, saying, “Well, I guess the best thing I can do for you is to try and get you the hell out of here.”

Staggering around and falling down, George concentrated on trying to straighten out his traitorous main chute. He noticed with disgust that it had dried up old cockleburs and twigs stuck all through it, none of which was in any evidence on the ground around him.

Unable to find the bag for George’s failed reserve, Bank picked up the chute and started dragging it up the hill. For a while longer George looked in vain for his lost gear but to no avail. Incredibly, he managed to get his chute inside the bag and began to carry it, following after the colonel. He would take a few unsteady steps and fall down, then get up, walk a bit more and fall again.

Finally, he found his team lounging beneath a large shady tree. He realized it was the tree he had seen from above on the way down. As he finally drew near, his team began to cheer and applaud. Hunt called out, “Good show W.!”

I asked George why none of his team had come out to help him or at least to pay tribute to his carcass when they must have thought he was a goner, 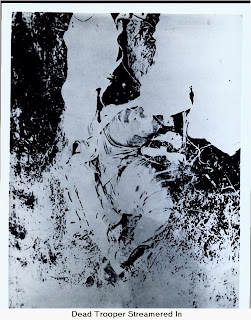 but George could not say why. I think it bothers him today that they did not, but after speaking to another SF veteran I did get one semi-plausible answer for their apparent callousness.

Here’s what a local Green Beret vet told me, “When I had my jump accident and broke my leg, I didn’t want any help, and my buddies all understood that. It’s a Special Forces thing.” I’ll take his word for it, but it sure goes against my own natural inclinations to rush out and try to help a fallen buddy.

Click here to read Part 5 to see what happens to George next. He was hurt much worse than anyone could have imagined; and even though George survived his deadly plunge, “The Grim Reaper” was not yet done with him. Oh no, George’s problems are FAR from over—he hasn’t QUITE completely cheated Death just yet!

Posted by PhilippinesPhil at 11:16 PM

I've read of people surviving falls like this. I wonder how many have? I'm guessing it is a pretty exclusive club.

I've already met two, both special forces. Most folks won't talk about it.