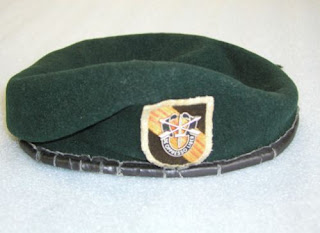 George recalled the final seconds of his fall chuckling, “I heard Captain Jack Abraham Junior the III hollering at me from below. I saw him trying to direct his chute in an attempt to intercept me by pulling on his risers. T-10s are certainly not steerable, still, he tried. In trying to help me he was sacrificing himself because if I had hit his canopy, there was a good chance it would have killed us both. More from instinct than anything else, I reached out and made a swipe for it, but I just flashed past him.”

He paused, taking a sip of coffee before continuing, "It’s very quiet up there. You can hear everything. I heard another SF jumper yelling something at me. I remember seeing red hair under his helmet as I went past him, but I couldn’t catch what he was saying."

"I could see the ground coming at me very quickly. You don’t really have a sensation of falling; it’s more like the earth comes up at you. I knew there wasn’t much slowing me down if anything. I saw a tree below go from tiny to big in a matter of a second or two. Since that day I’ve tried to gauge what my falling speed was by watching trees flash by along the highway. You know, as you approach them and they get bigger and bigger? From that, I figure I was going faster than 60 miles per hour—at least.”

Note: (Terminal velocity of a sky diver is about 125 mph, so considering the drag of his chute materiel and equipment, plus the fact that he slowed down initially by glancing off two of his buddies’ chutes, a 60 plus miles per hour closing speed sounds reasonable).

“I assumed the tightest PLF I could.” (PLF stands for Parachute Landing Fall). Sitting on my couch across from the room from me George demonstrated the PLF. With knees bent and tightly held together, he twisted his legs as far to his left as he could from the hip, while also twisting his upper body as far as possible in the other direction. He looked like a human spring or a corkscrew.

He explained, “The way it’s supposed to work, when a jumper hits the ground under his chute at 16 to 18 feet per second, his body rolls up the earth and the force of the impact is a glancing one up the jumper's side that actually flips him back into the air and unto his feet. That’s the theory anyway.”

I laughed, interrupting him, "And you say you did THAT for a living? Are you nuts?!" I said it trying to pull his chain a little.

George laughed right back, "Hell yeah! I loved it!"

When he saw that tree far below seem to instantaneously blow up to full size he concentrated on doing the tightest PLF he’d ever done. Instead of going into a screaming panic and fixating on the probability of death, he concentrated on following "the numbers" of his training. Muscle memory is a wonderful thing, allowing one to act even under the most unthinkable of circumstances.

With very little emotion he describes nonchalantly what it was like to hit the ground going as fast as a speeding car on a highway, “It was like a black explosion.” When he said it I could tell it wasn’t the first time he’d done so. He’s probably been asked that question dozens of times over the years.

He went on, “I was told that I bounced at least 20 feet back up into the air. All I felt was that black explosion and then moments later I felt a terrible “Whummp!” when I landed the second time flat on my back. Everything stayed dark, but then, next thing I knew, I could see blue sky and clouds, and then I heard a man screaming.”

George’s vision was stuck in an eyes-open straight-up gaze. The way he describes it he had only two senses still working; he could see and he could hear—that was it. He couldn’t move, not even his eyes, and he had no sensation of touch anywhere in his body.

Perhaps strangest of all was that he could not breathe, yet he did not have the panicky sensation of oxygen starvation that normally comes when a person can’t draw in air. The thought crossed his mind that maybe he WAS dead, but then he figured if that was the case then he shouldn’t be able to see and hear.

The fellow doing all the screaming was the red-headed soldier that had yelled at him as he plummeted past. Evidently the guy had been so transfixed at the sight of George streamering into the ground that “he hadn’t taken care of his own business,” as George says. The man suffered a nasty compound fracture to his leg and he was letting everybody know it.

George could hear vehicles approaching and then stop nearby. One was a jeep and the other an ambulance. He heard an authoritative voice say to the medics in the ambulance, “Nothing you can do for that guy. Go ahead and take the man with the broken leg in. I’ll pronounce that one dead and we’ll bring him on in ourselves in my jeep.”

George knew that he was the deceased fellow they were talking about and he struggled to move to prove that he was still alive if not kicking. Evidently the sickening sight of a man bouncing off the ground from 1250 feet at high 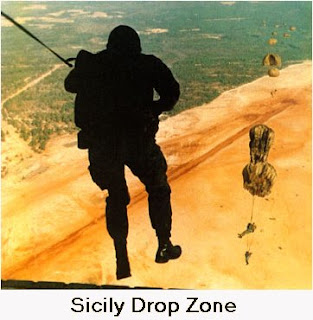 speed had convinced everyone who saw it that no one could possibly have survived such a thing.

Note: I found a website that includes a description of the Sicily Drop Zone, the place on which George “bounced.” The person who wrote it seemed to have George in mind while writing the blackly humorous description:

“Sicily Drop Zone: One of the main spots at Bragg for testing whether or not you’ve packed your chute properly. The ground is nice and sandy, so if your pack malfunctions, they can just cover you up like a cat turd.”

Posted by PhilippinesPhil at 8:52 PM