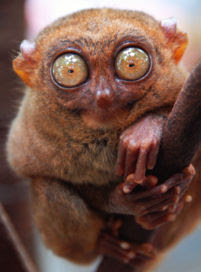 By the time we got back to Loboc the rain had ceased, the sky was blue and the sun was shining. The guide called ahead to let the restaurant know that we were on the way. I had no idea why it was so important to get there at a set time. Here, being late is no big deal—it’s jokingly accepted—like a charming national bad habit. Still, I was intrigued that perhaps I was in for something special.

We pulled up outside the restaurant and right away I figured out why punctuality was an issue. We were going to eat our lunch floating down the . As it turned out, we were too late. Our scheduled lunch boat pulled out as we pulled into the parking lot. No worries—there was room for us on the next one.

In the meantime, I got a chance to check out some of the little bug-eyed diminutive creatures that is famous for—the tarsier. It’s supposed to be a kind of monkey, and people call them that, but they don’t seem like monkeys to me. And sure enough, although they ARE a type of ancient 45 million year old primate, they are NOT monkeys.

The facility for the floating restaurants is built on the river and serves as kitchen, souvenir shop, tarsier zoo, bar, restaurant, waiting area and dock. The tarsier observation area overlooking the dock is where I spent most of the half-hour wait it took the staff to prepare the next lunch boat. I found the furry little animals immensely fascinating. I never tired of examining them, although according to some websites I wasn’t supposed to encourage that kind of unnatural tarsier display and should have ignored them. Yeah right.

Here’s a statement you’ll find about the private tarsier displays like the one I patronized: “Please avoid visiting the tarsiers kept in cages along (the) . Here, these shy animals have a miserable live (sic), and normally don't survive for long.”

Supposedly these animals are a semi-threatened species; if so, then they should be protected. Putting the onus on tourists “to do the right thing” is ridiculous, because virtually no one operates that way here. If these private tarsier zoos are bad for them then close them down.

I did read something revoltingly disturbing online. In the not too distant past, people trapped tarsiers, and then skinned and stuffed them into “cute” poses in order to sell them to tourists. I don’t know if this foul practice ended because tourists refused to buy them or if the government finally stepped in and ended it. After experiencing them I can’t imagine buying such a monstrosity. I’m just glad I didn’t have to see stuffed tarsiers on display at the souvenir shops. I think I would have protested by simply leaving and not buying anything at all.

The tarsiers I ogled at the restaurant were displayed unconfined on large bushy potted plants (bamboo, if I remember correctly) that gave the tiny animals at least a minuscule bit of nature in which to hide. At first glance I didn’t see anything but the plant foliage. A keeper/handler standing nearby pointed one of them out to me. Once I knew what to look for I noticed that the scattered plants were populated with many of the appealing little creatures. 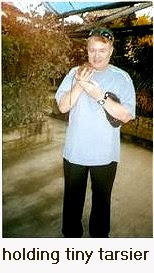 It seems almost mandatory that visitors have their pictures taken with a tarsier, either holding one in their hands or placed carefully on their shoulder or on the top of their head. I went along with it and for a short moment cautiously held one for a photo. I cringe at this sort of practice. Small wild animals are vulnerable to human-borne disease and not everyone is mindful while handling them. I’m not a “people person” because so many of us are ugly-acting and callous. Young men and boys can be showy and one of them might purposely or accidentally hurt such a tiny thing. Watching people practically forced to hold the little large-eyed beings kind of sickened me. I wish it would stop.

The handler picked up the same docile tarsier that he used for all the tourist photos. He probably used this one little fellow because of its tame demeanor. I hope he didn’t medicate it to achieve that state, but I always assume the worst; it’s my nature. The tarsier folded up neatly on its haunches on the man’s hand to about the size of a softball. It seemed to use its tufted lion-like tail for balance and not for clinging. What he did next amazed me. He pulled straight one of the tarsier’s hind legs to demonstrate it’s enormous length relative to its body; that’s when I realized what the tarsier reminded me of—a lemur. 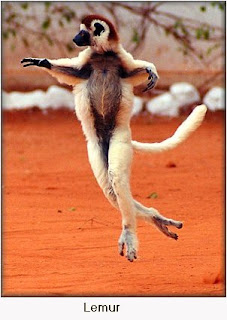 Sure enough, upon further reading it is indeed related to the lemur. The tarsier’s hind legs are incredibly long and what makes them seem astoundingly so is that normally they are virtually out of sight. They remind me of the way a frog keeps its legs tightly folded against its body until needed for swimming or jumping. It seems that tarsiers also use their lengthy legs for jumping as well. From what I’ve read they can snatch flying insects deftly from the air as they jump fantastic distances from one tree to another. I wouldn’t have suspected that, so motionless and enervated were the ones that I saw.

To clarify, it’s not really the tarsier’s legs that are so long; it’s their feet. They have the same sort of arrangement as most mammals and even birds, where the lower limbs have evolved and elongated so that the tarsal segment looks more like part of the leg than the foot. (Thus, the name “tarsier” from tarsal). A funny way to look at it is that this “arrangement” kind of gives the tarsier two opposing knees. 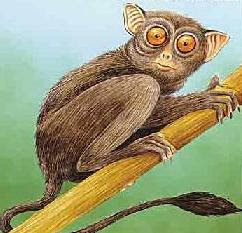 Take a look at the picture and you’ll see what I mean. An even funnier way to think of it is that we humans are the REAL oddity since we are the ones with some of THE shortest feet in the Animal Kingdom.

The tarsier is nocturnal, which is probably why they were so quiet and motionless that early afternoon. But I did see one show some animation when the keeper skewered a live cricket on a sharp barbecue stick to allow a tourist to offer it to one of them. She held the impaled struggling insect an inch from a lethargic tarsier’s face. The napping animal came to its senses signified by a slight change of facial expression. (Yes, these animals can manipulate their faces nearly as well as we can). With both hands, almost daintily, it slowly reached out and grabbed the cricket. Once firmly gripped, it quickly brought its live meal to its mouth, gobbling it down in a dozen bites, hardly chewing, if at all.

During the eating process I caught a glimpse of its needle-sharp teeth—I sure wouldn’t want one of them to bite me. I’ve eaten live crickets and grasshoppers before so I have to marvel at how that tarsier was able to so effortlessly crunch up and then negotiate the cricket’s rigid legs down its throat, especially considering how relatively small its mouth and teeth are. I guess my problem has always been that the cricket and hopper legs get stuck so easily between my teeth—which is clearly NOT a problem for the tiny-toothed tarsier.

Because its features are so exaggerated, the tarsier looks like a living cartoon. Its fingers and toes are exceedingly long and slender, the tips bulbous; they look like suction cups and I presume they function like them as well. In fact, the handler showed us how their delicate-looking hands, feet and tail are “designed” for easy climbing and grasping. The eyes are amazingly gigantic and look all the more uncanny because of their tiny pinpointed daytime pupils. Their rounded ears stick straight out and are obviously meant for gathering information in its normal nighttime wilderness setting. And just like an owl, a tarsier can look directly behind itself by turning its head a full 90°, although I never saw any of them do that.

Before leaving the little display colony I inspected each animal closely trying hard not to be too much of an agitation to them. It’s obvious they are accustomed to people peering at them from up close because none of them seemed the least bit disturbed. Surprisingly, each animal was unique. What made them diverse were their faces. Even the little guys half asleep displayed a different personality on each of their little mugs. Every one had its own “thing” going on—some seemed to be smiling, others were grinning, sneering, grimacing, pursing their lips or scowling. My favorite one was a little fellow with an evil-looking gremlin-like face. M 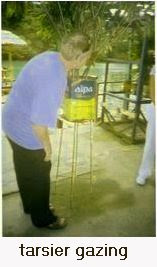 ost of the tarsier pictures on the Net show them with acutely wide-open lidless eyes, but most of the ones I saw had their eyelids partially closed, which adds even more character to their elfin faces.

From what I’ve seen, it looks like the best way to see these precious teeny beasts is at one of the more professional conservatories. I didn’t go there, but try the Philippine Tarsier Foundation. Whatever you do, do NOT be tempted to buy one as a pet. It will be miserable and it WILL die—usually of stress. They are a social animal and they need to be with their own kind.

The boat was ready—time to grab some meat, take a seat, get off our feet, and eat! Stay tuned for my final post about our floating luncheon on the —a truly sublime experience.

Posted by PhilippinesPhil at 2:08 AM

Wow... an interesting trip, and with an Animal Planet-like lecture to boot! I'm suspecting that you are a bit Obsessive Compulsive when it comes to gathering information that takes your fancy :-).

I cringed at the thought of capturing the hapless creatures, skinning them up to stuff them and sell as souvenirs.

I remember experiencing the "taming" of wild animals in the presence of humans. We were in Palawan in the late 90s. There was this stretch of planks that served as pathway going to the cave/subterranean river. Along the way, the monkeys would cautiously creep up behind you and grab whatever they can from you loosely-hanging plastic bags. And at the picnic area, the lizards (or bayawak.. are these monitor lizards?) would creep to the picnic tables at the smell of food, to the utter bewilderment (and horror) of the picknickers. They've gotten so accustomed to the presence of humans and their food that they've become "domesticated".

Nope, believe me, no OCD here. I do like to try to use my powers of observation to capture the "moment" though. And naturally, I always do a little reading on what I'm writing about. Having a little science to back up one's observations is always a useful thing.

it has the biggest eyes related to its head

they can turn their heads almost 360 degrees (wish i can too:)